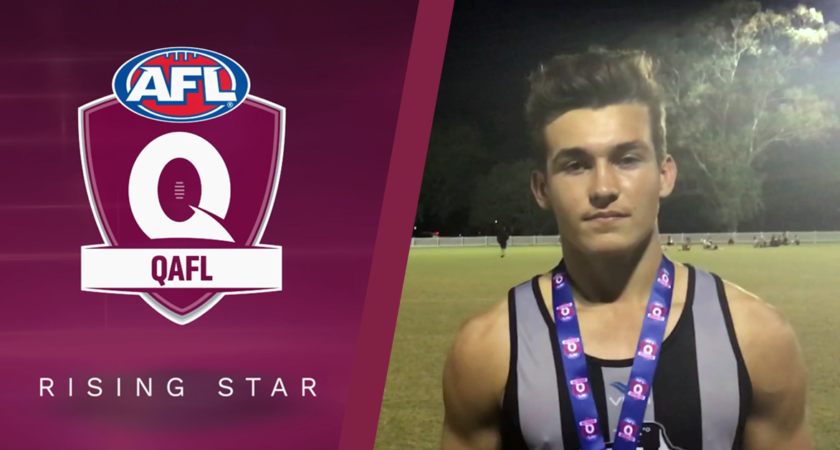 Some words of advice from club legend Ben Jaekne-Cain early this year have proved pivotal in the development of Western Magpies teenager Riley Greene.

Greene, only 17, is the Round 18 nominee for the QAFL Rising Star Award after a series of strong performances for the Magpies in their quest for finals action.

Greene attributed the support of Jaenke-Cain in particular, but also that from ex-Brisbane Lions pair Ryan Harwood and Claye Beams as behind his emergence as a key defender.

After electing to join the Magpies after being a member of Park Ridge Pirates who won the QFA Division 2 flag last year, young Greene has come along nicely.

“I didn’t play in the first round, more so because of my decision-making and composure with the footy,” said Greene.

“I spoke to Ben about that – he’s an absolute legend at Sherwood – and he gave me some little tips and I guess that boosted my confidence.

“I like Morgs (Brydan Morgan) as a coach and also the support from Ryan and Claye.”

Greene has traversed plenty of kilometres pursuing his dream.

He started as a junior with the Jimboomba Redbacks and in the last off-season he played three games with Tracy Village in the Northern Territory Football League Division 1.

At one stage Greene was torn between joining the Magpies or cross-Brisbane rivals Morningside, where 2018 Park Ridge grand final teammates Nathan Colenso and Anthony Stewart are playing.

“I definitely made the right decision,” said the teenager heading into a huge game against Surfers Paradise in this weekend’s final round, when fifth place for the finals goes on the line.

The Magpies hold down fifth spot narrowly on percentage ahead of Mt Gravatt and Labrador, who play each other at Dittmer Park.

“It’s an awesome opportunity and I think if we can beat Surfers down there we’d 100 per cent deserve to be playing finals,” he said.

“But we have to beat Surfers by enough points to hold on to our percentage.”

Like many young men of his age Greene is not sure what the future holds for him, both on and off the field.

To play at the highest level he can – with AFL at the top of the wish list – is his sporting target.

But right now what he ends up doing off the field is another matter as he ponders a future as a personal trainer, a physical education specialist or even a fireman.

Whatever, Greene clearly has the brains needed to make a success of what career path he chooses.

Growing up, Greene attended Hills College, then switched to Greenbank Primary where he was a school captain.

He then attended Park Ridge High where he was also named school captain.

Greene said the Rising Star nomination is a nice little reward for the effort he has put in this year.

He joins Jack Austin and Dan Edwards as Rising Star nominations from Western Magpies this season.