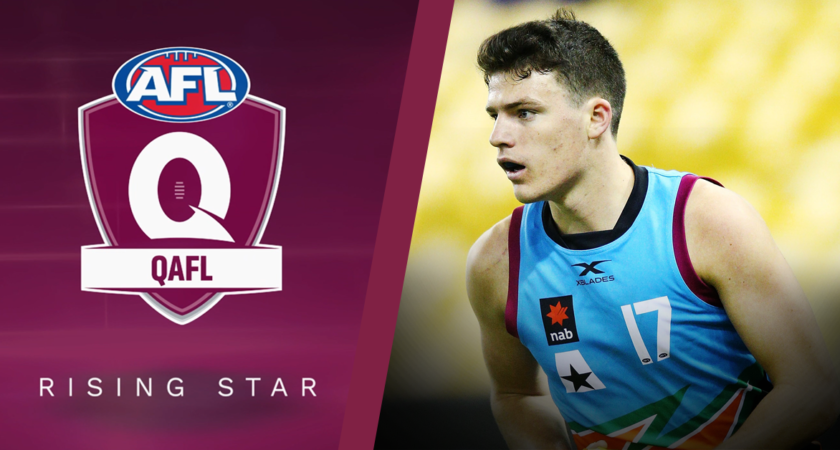 It has been a hell of a long journey, in every sense of the phrase, for promising Mt Gravatt youngster Tom Matthews to reach a stage where he is on the verge of some big things with his football.

For example, not many players can say they spent up to five hours in a car, twice a week for five years, pursuing a dream to one day play AFL.
But 19-year-old Matthews has done that, thanks to the help of his devoted parents Scott and Tanya.

The nomination is some compensation for the amount of time the Matthews clan have put in to help their son. But there may be bigger things to come.

The family were living in Dalby, west of Toowoomba, where Tom started playing football in the Under 9s.

As a 12-year-old Tom wanted to join some Queensland team mates at Coorparoo in Brisbane, which meant twice-weekly trips (208km one-way over two and a half hours) for training and match day.

“We did that for five years and a lot of school was missed,” said Tom.

Yet a bonus of all the travel was that when he gained his L-plates Tom quickly chalked up the hours necessary for him to get to P-plate status.

As Tom’s career progressed his parents took a huge plunge and decided to relocate the family of four boys to Brisbane, where they now live at Yeronga. A sister was already living inn the capital.

That family relocation is something Tom will be forever grateful.

“It is certainly a lot better living in Brisbane,” he said.

“Obviously I’m very thankful for what they’ve done so hopefully there will be some rewards in the end for them and myself.”

As he developed Tom played for the Lions NEAFL (five games), Redland NEAFL (two games), the Allies U18s and the Lions U18 Academy.

Mt Gravatt coach Adam Boon said he had no hesitation in getting the tall, big-bodied midfielder Matthews over to Mt Gravatt.

Boon played alongside Matthews in some NEAFL games in 2018 and liked what he saw.

“Absolutely the potential is there, Tom is a very good player,” said Boon.

“Early in the year he wasn’t sure of where he was with his footy but I think he’s back and enjoying it now – and I wouldn’t be surprised if he gets another crack at the NEAFL at least.”

Mathews explained that an ankle injury in the pre-season was a frustrating time and he admitted he was not enjoying his football as much as he wanted to.

A chat with Boon convinced him to give the Vultures a crack and coming into a huge QAFL match against the Western Magpies on Saturday Matthews is clearly back on track.