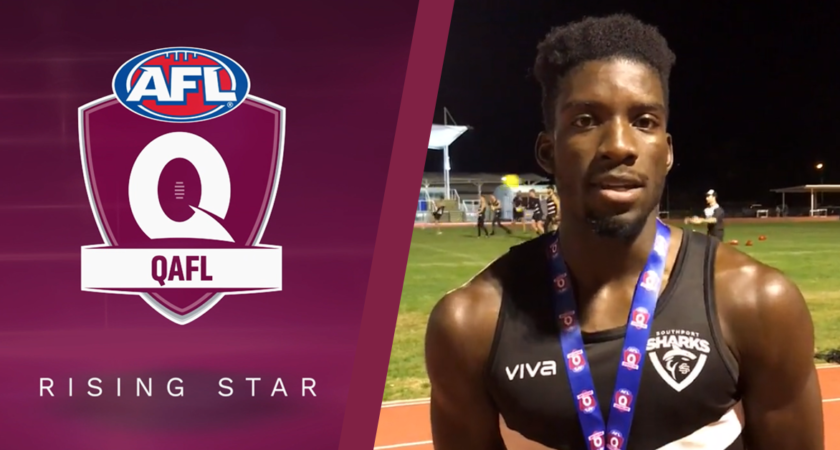 For all intents and purposes Kwabe Boakye originally moved to Rockhampton from Melbourne to improve his soccer game.

One of three children for Ghana nationals Nana and Ceceila Boayke, Kwabe was born in Melbourne but never kicked a Sherrin in a match situation for 14 years.

His love was the round-ball game and, strangely enough, that was the reason he enrolled as a boarder at The Cathedral College in Rockhampton, where one of his brothers was working.

A short chat with one of the teachers at the college was to change his sporting life – and Kwabe insists that chat was the reason he is now right up to his neck in Australian rules football.

“I was at lunch on my first day at the school and mucking around with a rugby league ball,” Kwabe said.

“Michael Rose was a teacher there and was also a talent academy coach and recruiter for the Gold Coast Suns.”

That was the career-changer.

“My move to Rocky was to advance in soccer. I was making all the state sides in Victoria but not getting much game time and I was always on the bench.

“I believed Queensland had better opportunities so I moved to Rockhampton.”

Now aged 20 and after a standout performance for Broadbeach last weekend, Kwabe is the Round 13 nomination for the QAFL’s Rising Star Award.

At 188cm in height and weighing 89kg, Kwabe is super athletic and has dreams of making it on to an AFL club list in the short-term future.

But firstly he has an immediate goal of making his NEAFL debut for Southport, where he is listed but has yet to play a game although he has 24 games in the NEAFL over two seasons with the Suns on top of eight games with Broadbeach this season.

As Broadbeach coach Beau Zorko said last weekend after the Cats thrashed Labrador, Kwabe has that X-factor, an ability to ignite the crowds with his sheer pace, his aerial ability and, at times, some brutal defence.

In his time with the Suns Kwabe loved the way half-back flyer Adam Saad operated with the footy.

He adored the way Saad used to take on the game and learnt quickly that if you  have pace, then use it to your advantage and take the game on.

Wo how quick is he?

“So speed and agility are my main assets.”

Kwabe’s athleticism brought the Suns attention. He can run 20 metres in 2.85 seconds, only 0.04 seconds slower than the time Saad recorded at the 2012 draft combine.

It is worth noting that every two years father Nana, an engineer, and mother Ceceila, a doctor and university lecturer, take Kwabe and his older siblings Baffour, Eddie and Amma, back to Ghana where they continue to help out the local communities.

It is an important part of Kwabe’s heritage and they are visits that have convinced him to never take his football for granted.