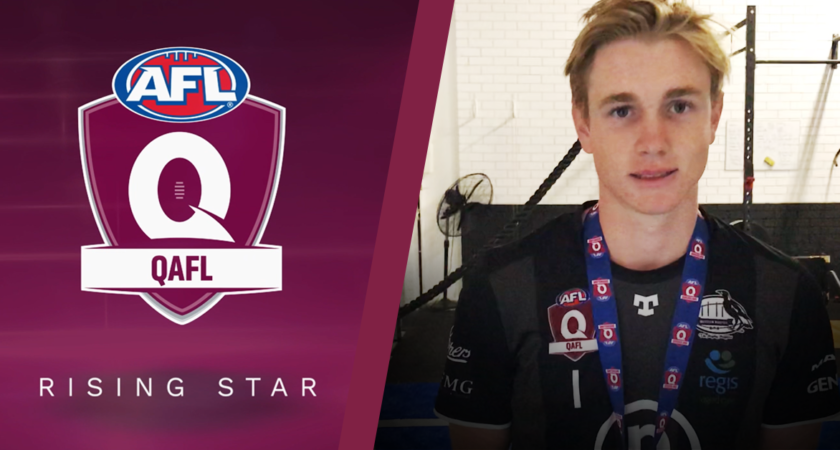 The son of a leading QAFL umpire from the 1980s-90s is starting to make noises in the footy scene, but as a player rather than a whistle-blower.

Dan Edwards, 19, has become a regular in the Western Magpies senior side after making his debut against Mt Gravatt in the opening round.

And a string of consistent performances have led to Edwards being named QAFL Rising Star Award nomination for Round 9.

Magpies coach Brydan Morgan believes Edwards can go on to bigger and better things, describing the winger as very coachable and quite capable of playing at higher levels.

“Dan has been fantastic,” said Morgan.

“He won a colts premiership last year and we quickly saw his attributes to step up and play senior footy quickly.

“He has speed, he’s aggressive, he’s skilful and he is very coachable.

“I actually think he has the attributes to progress to at least the NEAFL, maybe beyond.”

It is little wonder that Edwards can play the game because he was surrounded by Australian rules football as a kid when his dad Don was among the elite of the umpiring ranks.

Young Dan started playing rules with the Yeronga under-9s through to the under-12s, before switching camps to Sherwood.

He played through the divisions from U13s to U17s before playing QAFL colts for Western Magpies.
In 2017 Edwards was a member of the Magpies side that lost the grand final to Morningside before last year’s GF victory against Palm Beach Currumbin when he was vice-captain.

The next step was a natural and Edwards found himself named for his first-grade debut in the opening round this year.

He was subsequently dropped for the next round but has been back in the firsts ever since.

The dream, like every other kid, is to play AFL but Edwards is being realistic when he thinks he may have missed the drafting boat.

“The dream’s always been to play AFL but now I’m past the draft year I’d like to make the NEAFL,” he said.

“Other than that, then aim is to keep my spot in the seniors side.”

And, in line with that, Edwards wants to see the Magpies shed their current run of poor form and get back into finals contention.

“We’re not travelling too well at the moment so hopefully we can get back on track and get closer to the finals,” he said.

It was a few years ago that Edwards realised he could not successfully combine two sports.

It was with reluctance that he gave cricket away despite the fact that as a teenager he was showing plenty of promise playing grade with South Brisbane.

“I was all right at cricket, but I ended up giving it away,” he said.

With dad Don having been an umpire, after a stint playing with the old Western Districts, and playing the game himself, young Edwards is never far away from Aussie rules.

He is currently working full-time for the AFLQ as part of the development program for South Brisbane.