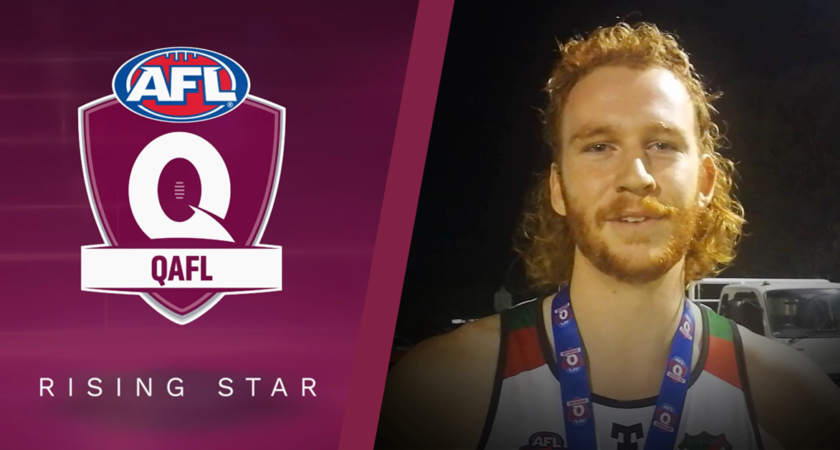 If Loki Haines gets the chance to play at a higher level, then so be it, but right now all he is interested in is helping to get Sandgate into the winner’s circle.

Haines, 19, is the Round 7 QAFL Rising Star Award nominee after a succession of strong games for the Hawks.

A product of the Noosa juniors on the Sunshine Coast, Haines linked with Sandgate when he moved to Brisbane late last year for work.

He made his debut in the second round – Sandgate had the bye in round one – and has played all five matches for the Hawks as a defender.

With his long red mullet hairstyle and beard, Haines looks like your typical Sunshine Coast surfer, yet he declares that he is hopeless when it comes to cracking a wave.

“I just can’t surf, which is a bit embarrassing because I come from the Sunny Coast,” he said.

Yet Haines can play football, as evidenced by his performances for Sandgate so far this year. Those performances have earned him a spot in the Queensland squad.

Representative football is one thing and so is the hope of one day playing at higher levels such as the NEAFL or the AFL.

But those lofty heights are not exactly on the radar of the 190cm teen right now.

Helping Sandgate climb the QAFL ladder is his number one priority.

When Haines first went to Lemke Road Oval to train with the Hawks he found a club where he felt comfortable.

The move helped him rediscover his love of football because he admitted that after his stint with the Brisbane Lions Academy ended he felt trapped in a void.

“I lost it a bit because I got caught up in the thrill of making it to the next level and obviously I wasn’t good enough for that,” was Haines’s candid comment.

“I was just trying to find my love for footy this year and I’ve done that.

“I hadn’t been with the Hawks when it was doom and gloom but when I arrived here I could feel the mood of a club I believe has a future.

“I feel we are building, I really do think we’re going from strength to strength.

“Sandgate is a humble, down-to-earth club, which is awesome for me.”

Haines was born in Airlie Beach in the Whitsundays but moved with his mother Megan to Noosa when he was three.

He started playing Auskick at age five, then linked with the Noosa juniors where he played in the 2018 colts preliminary final.

We couldn’t help but wonder about the origins of his name Loki.

His name is actually Lachlan but he jokes that when he has to sign documents he has to use Lachlan, which annoys him a bit. He much prefers the shorter version.

The name Loki comes from the name of a yacht his father David and brother Sam used to sail.

“It is pronounced Lukey,” explained Haines, who is one of the most laid-back characters you could find.

“I am a weird person, I’ve always been the clown in most teams and situations,” he confesses.

“I don’t have one particular quirk, I’m basically all quirks and I try not to take life too seriously.
“I think footy’s about the only area where I pretty much get serious.”