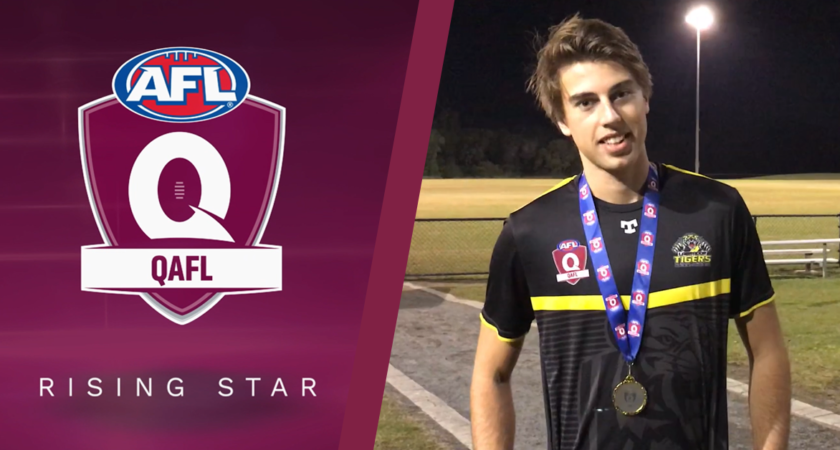 Labrador talent Hugo Barry was a kid growing up in Aussie rules territory in Adelaide but it was not the national game that had his attention, it was soccer.

Barry was good enough to represent the Croweaters in both indoor and outdoor soccer in under-age groups.

A tall youngster who played striker in the round-ball code, it was inevitable that Barry turned his prowess to Australian rules football at high school because that was the code all his mates were playing.

He played with the Walkerville club then was lured over to North Adelaide where he played colts.

As a growing teen Barry was good enough to make the South Australian squad for the national under-18 title.

Now, after overcoming a couple of bad injuries, Barry has won the round 14 nomination for the QAFL’s Rising Star Award.

After getting over a shoulder injury, Barry has been good for the Tigers in their past two games and is keen to help get the club into the finals this year after a slowish start.

“We think we’re a good chance of playing finals,” the 20-year-old said.
Go back a few years and Barry was making a success of his switch of codes.

But it was during his only game with SA’s Under 18s that he ripped an anterior cruciate ligament playing against the Allies at Adelaide Oval.

That probably made up his mind to enlist for a degree in law at Bond University on the Gold Coast and he actually played one reserves and one seniors match for the Bullsharks in QFA Division 2 late last year.

That was when Labrador people took an interest in him and shortly after he agreed to head up to Cooke-Murphy Oval for a crack at the QAFL.

He played the first five matches in seniors for the Tigers but then did a shoulder, which sidelined him for a few weeks.

Standing at 193cmm and weighing inn at 85kg, Barry has the ideal physique to become one of the leading lights of the QAFL forwards.

And he is being helped along the way by former Brisbane Lions forward Bryce Retzlaff who has been a tremendous help.

“Bryce has been a good role model and teacher,” he said.

“He has helped with my leading patterns but most importantly how to use the body in contests.”

In his SA under-18 days Barry played with some talented performers who are now part of the AFL system.

Whether he gets to that level remains to be seen because his priority is to complete his law degree.

“At this stage I’m more focused on uni,” he said when asked if he has a dream of playing AFL.

Still, the move to the Gold Coast has had some benefits away from the football field.

“I’m trying to learn how to surf,” he said. “At least the water’s warmer up here.”