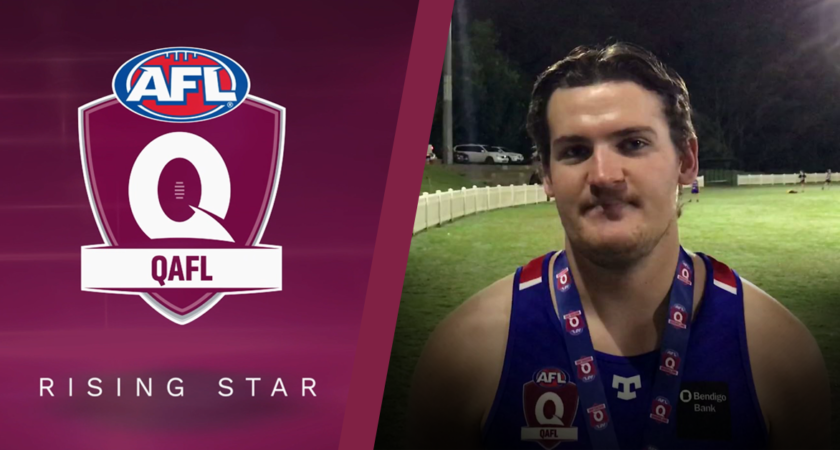 A couple of weeks into his 20th year, the Aspley junior product has come along nicely into his second year with the Gorillas and under new coach, the unrelated Barry O’Brien.

After playing five games last year – he made his seniors debut in the fourth round against Labrador – O’Brien has played in all of the Grange’s three games this year and has stood out in all, particularly the last two.

He started a touch quietly against Surfers Paradise but stood out in Grange wins over Western Magpies on Good Friday then against Sandgate on Anzac Day eve.

His efforts won him four votes (versus the Magpies) and seven votes (versus Sandgate) and he now sits in the top nine in the race for the Syd Guilford Trophy.

But O’Brien was not aware there was such a thing as the Syd Guilford until we spoke to him this week.

He does now and will be happy if he can continue on with the good work he has shown for the Gorillas so far this year.

What adds to the O’Brien story and his ability to play at a high level of football is the fact that he was born partially deaf.

“My right ear is almost totally deaf and the left ear is like half-deaf,” he said.

This can obviously lead to problems out on the field, where O’Brien does not wear his hearing aid – although he has not experienced too many difficulties in not hearing when the whistle is blown at times.

“I actually tried wearing a hearing aid but I got a hit in the head and almost broke it,” he said.

So with perseverance and understanding O’Brien has managed to stay clear of any issues with umpires.

“I can hear the whistles, but only when I’m near the umpire,” he explained.

O’Brien started his footy with Aspley in the Auskick program and went through the age groups until the under-17s when, after winning the best and fairest award, he took the plunge and elected to join Wilston Grange.

“I went there mostly because most of my mates from school were there,” O’Brien explained.

His father Michael is an Aspley old boy and younger brother Finn plays juniors with the Hornets.

An electrician who likes nothing better than camping and fishing when football allows, O’Brien is satisfied to be able to stay fit playing his Aussie rules.

Asked if he’d like to go further in the game as a midfielder O’Brien said: “No, not right now because I’m pretty focussed on my job.