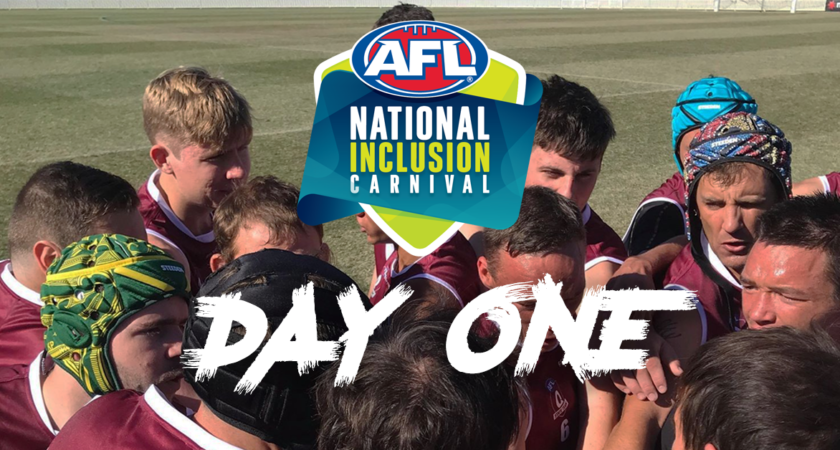 The Rams, who were playing on their home field in Sydney’s west managed to get the fast start in the contest however Queensland weathered their early push to show composure.

The Big Q soon worked their way into the contest and controlled most of the first half. A handful of opportunities were created although the teams’ conversion was lacking as Queensland took a two-point lead into the main break.

With the game up for grabs, the second half followed in much the same vein as the first one with plenty of scoring opportunities created.

Graydon Poulsen soon booted the breakthrough goal for either side – a score that would ultimately pay dividends as Queensland would go on and win their opening matchup.

Queensland suffered their first loss of the carnival when they fell to the Northern Territory in their second game of the day.

Despite solid performances from the likes of Dylan Evans, Nathaniel Gill and Josh Correa, Queensland couldn’t match it with the side from the top end, who burst out of the blocks and looked a slick and well-polished unit.

Contrastingly, Queensland lacked some clean hands and composure around the ball and allowed Northern Territory to kick away with two majors in the first half and another four in the second.

With more games to come in the lightening round, Queensland took plenty away from the loss that will assist throughout the remainder of the carnival.

A fast start from Queensland wasn’t enough to withstand the talented Victoria Metro outfit in the team’s third game of the day, as the Big Q fell agonisingly short from the breakthrough win by just two points.

Queensland dominated much of the first half, with play almost exclusively held in the maroon’s attacking end.

Two goals from Graydon Poulsen provided the scoreboard pressure as Queensland took an incredible 13-poitn lead into the main break.

The opening minutes of the second half were a frantic affair and after three minutes of play, Victoria Metro had worked their way back into the contest in large due to their clearance winning midfielders.

An arm wrestle soon ensued with neither team looking likely of breaking the deadlock. Queensland soon burst forward and had a chance to win the game however the shot sailed wide.

Victoria Metro on the other hand, made the most of their opportunities and scored two late behinds to claim an unlikely come-from-behind win.

With hopes of qualifying for Division One, just as they had in recent years, Queensland were out for a win in their final game of the day against Victoria Country.

Ultimately though, the game would end in a draw – a result built largely on the back of a second-half fight back from the Queenslanders.

Victoria Country burst out of the blocks in the opening half and quickly asserted their dominance on the game.

They quickly established a two-goal lead and looked the team most likely to claim the win.

After a break however, Queensland worked there was back into the contest on the back of some great work from Josh Correa and Brad Lawrence.

It quickly became evident that Queensland had the momentum in the contest and Graydon Poulsen, just like he had done for much of the day, kicked away and ensured the team’s hard work wouldn’t without a score.

Poulsen again added his name to the goal scorers sheet in the second half, taking his carnival tally to four already, and along with Robbie Van Allen, lifted Queensland back into the fray. Neither side could add anymore as time ran out and a draw ensued.