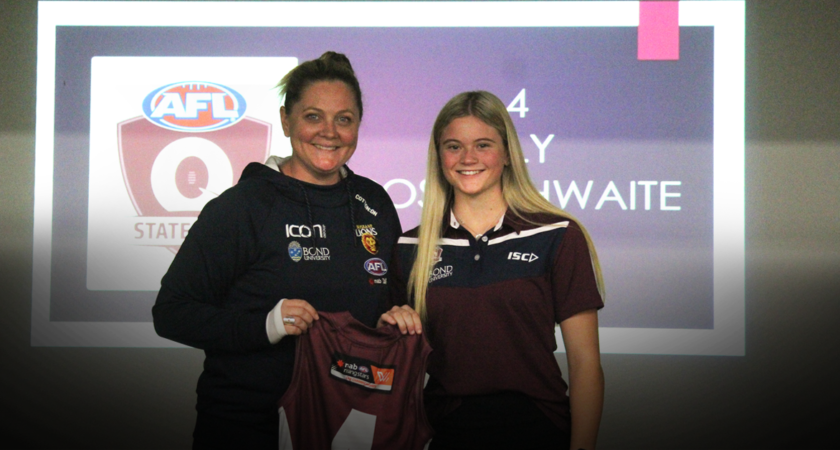 Moreton Bay junior Lily Postlethwaite will lead the Queensland side at the upcoming NAB Under 18 AFL Women’s National Championships after being named team captain at the official guernsey presentation on Wednesday night.

Postlethwaite was named captain by new Queensland coach James Gellie in front of a packed ceremony at Leyshon Park just one week out from the team’s two Round 1 National Championship showdowns against West Australia in Perth.

The Brisbane Lions Help for Kids Academy product, who is also plying her trade for Maroochydore in the Bond University QAFLW in 2019, will be joined by Vice-Captains Ellie Hampson and Emmi-Lee Zanker-Close across the Championships.

Speaking at the presentations, Gellie praised the leadership of the trio – all who enter their draft eligible year in 2019.

“These girls all bring their own form of leadership to the team and it really excites me that these three girls will be able to lead the team and provide a good platform moving forward,” Gellie said.

Hamspon, a Gold Coast SUNS Academy member, has already earned her place on the SUNS AFLW list as one of three inaugural signings, along with fellow Queensland state representatives players Charlotte Hammons and Kitara Farrar.

Zanker-Close, an Ormeau and Southport junior and fellow SUNS Academy member, rounds out the trio of captains who will form the nucleus of a larger leadership group.

The captains were chosen following a leadership seminar with Queensland team runner Sam Virgo where players then nominated themselves for the position before the coaching staff then selected on their final appointments.

In total, 13 players put their name forward to be considered for the position and were the chosen to form the remainder of the leadership group.

The Queensland side will travel to Perth next Thursday for their two games against West Australia at Subiaco Oval.