U16 National Champs to commence 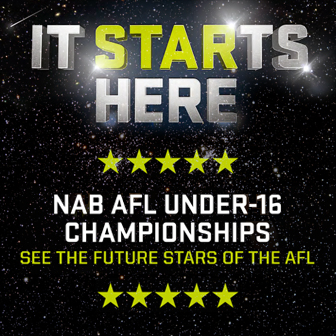 Queensland take on Tasmania in Round 1 of the 2012 NAB AFL Under-16 Championships which kick off this weekend in Sydney.

After the successful introduction of the World XVIII and South Pacific teams in 2010, another exciting development will occur in 2012 with the inclusion of two more teams, Western Australia North West Academy and the Flying Boomerangs.

The North West team provides an opportunity for players from the Kimberley, Pilbara and Gascoyne regions, while the Flying Boomerangs, a personal development and leadership program for 14 and 15-year-old Aboriginal and Torres Strait Islander boys, will field a team selected from the National Under- 15 KickStart Championships held in April.

The 2012 NAB AFL Under-16 Championships in Sydney will feature a three-match, roundrobin series in each of three divisions at Blacktown International Sportspark and Bruce Purser Reserve.

The division winners will be determined from these matches. Matches will be played in Sydney between the 7th and 14th of July.

Breaks are 5 mins, 20 mins & 5 mins respectively for all matches.