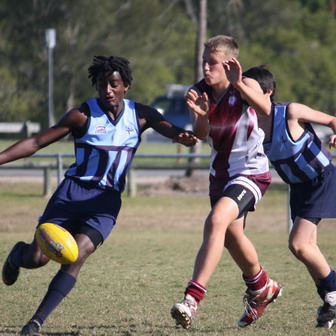 These games were a great spectacle all day and with Pialba beating Pacific Paradise by one point in the final game of the day it was to go back to percentage as to who would go through to the next stage.

It was Pacific Paradise who with a percentage of 130 per cent edged out Caboolture East on 102 per cent to move onto the next level of the Brisbane Lions Cup.

Stella Maris got off to a strong start against Banksia and continued on their way to easily advance through to the Semi finals in July.

It was great to see Gin Gin get as far as they did in the competition as this was the first time they have played any AFL school footy competitions.

The High School boys were represented by Caloundra from the Sunshine Coast, Wavell from Brisbane North and Aldridge from Wide Bay.

Wavell got off to a great start easily beating Caloundra in their first game.

It was then Aldridge who after a three-and-a-half-hour bus trip came out firing, beating Caloundra by 38 points.

It came down to the last game between Wavell and Aldridge as to who would advance through to the next stage.

It was a close game and the Wavell State High boys got through by 16 points, a great effort by the boys who were predominately represented by Rugby League boys.

Congratulations to Pacific Paradise, Stella Maris and Wavell on advancing to the next round of finals in the Brisbane Lions Cup.

Hawks, Swans change colours for a cause
U16 National Champs to commence