Queensland U18’s too strong for NSW/ACT 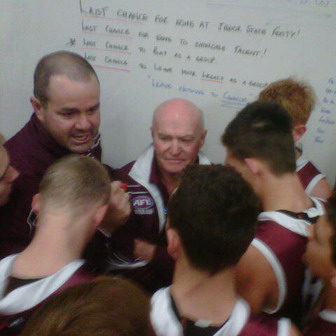 Queensland has defeated the NSW/ACT Rams by 28 points in the final game of the NAB AFL Under-18 Championships at Simonds Stadium on Thursday.

The Scorpions finished the carnival with the same number of division two wins as the Northern Territory and Tasmania and could have snatched the title from the Thunder’s grasp with a 100 points-plus win, but had to settle for the 10.7 (67) to 6.3 (39) result.

Queensland captain Andrew Boston was the architect of the win with 23 possessions and a goal, with Blake Grewar and James Ives also important with 15 touches each.

Michael Gibbons led the way for the Rams with 25 disposals, while Daniel Robinson and Zac Williams managed 17 possessions apiece.

The huge win necessary to claim the national crown looked a tall task from the outset as the plucky Rams established a three-point lead at the first break.

Clay Cameron finally gave Queensland the lead with his goal late in the second quarter, but Caleb Vearing put NSW/ACT back in front at half-time with a goal in the last minute.

That would be the Rams’ last goal of the match, however, with Daniel VanDeWerken, who finished with three goals, and Geelong father-son prospect Jordon Bourke combining well in attack to seal the win for the Scorpions.

U16 National Champs to commence
Cairns umpire for Country Championships