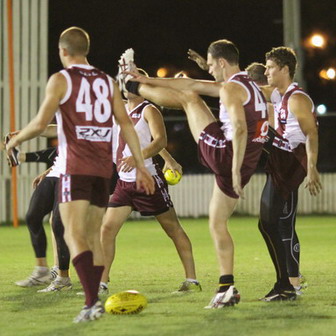 In a first for the North East Australian Football League (NEAFL), Under 21 and Open representative teams of the Northern and Eastern Conferences will play off this weekend at Southport.

With South Australia and Tasmania also hosting representative games it is the first time state leagues throughout Australia have a fixtured bye allowing for the representative matches to be played at the same time. Matches between the state teams will be rotated over a six-year period.

While teams will be wearing state guernseys, the matches are not state of origin, players will be representing the league in which they play in.

“For the first time state league players have the chance to play in a structured representative format.

“It will be a great opportunity to see the best players outside the AFL. AFL recruiters will be watching closely, last year 37 mature-aged players were drafted from state leagues,” he said.

AFL Queensland General Manager of Football Mark Browning said that fans could expect the host side to rise to the occasion.

“Queensland/Northern Territory players are very passionate and driven when it comes to representative football,” said Browning.

“The format will showcase the massive pool of talent we have playing at State level, and while we would certainly love a win, our ultimate goal is to use this as a vehicle to get more players into the AFL.”

All matches will be played on Saturday May 26.

This matched will be streamed live via www.neafl.com.au