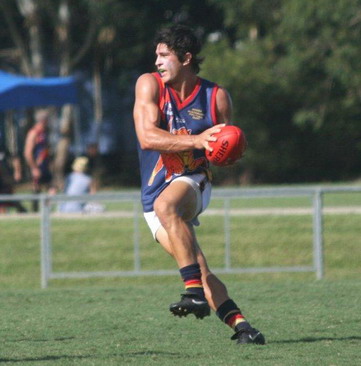 THERE may be less than half of the team still going around with Palm Beach-Currumbin, but they have a point to prove in today’s grand final rematch against Noosa at Salk Oval.

THERE may be less than half of the team still going around with Palm Beach-Currumbin, but they have a point to prove in today’s grand final rematch against Noosa at Salk Oval.

In one of the most controversial flag deciders in years, Noosa smashed the Lions by 66 points, but only after PBC had two players sent off in the first 10 minutes at a time when a couple of Noosa indiscretions went undetected.

Nine PBC players from that day remain, and they will have a point to prove, according to coach Daryn Cresswell.

But, he said, the main point is not to get sucked in again like they did last year.

This year’s version of Noosa does not appear as strong, especially in the midfield, as the 2011 model.

And the Tigers have dropped two matches against top teams Western Magpies, then Wilston-Grange last weekend.

Cresswell does not see this clash as season-defining, more the start of a fixture schedule that will really sort out his team’s chances.

After Noosa, the Lions play Western Magpies and Surfers Paradise.

The Lions have only one change, regaining big forward Bryce Perry-Bolt at the expense of youngster Tyler Cornish.

Noosa captain Adam Bovalino has put Noosa’s recent losses down to a lack of fighting out four quarters.

Bovalino disagreed that the off-season losses of midfield stars Luke Matthews and Luke Brauer are behind the apparent fall of the Tigers, who have 16 of their premiership side playing this weekend.

“It’s not so much our midfield, it’s just that we’re not playing four quarters, we’re playing in patches,” he said.

“If you’d have seen our last quarter against Wilston-Grange last weekend you’d have thought we were a 10-goals better side.

“We have confidence in our game plan and I reckon a solid, four-quarter effort is just around the corner.”

In Noosa’s only change, Josh Pierpoint (shoulder) is out and has been replaced by young Stu Allen.

This will be another good test for us,” said Surfers coach Beau Zorko.

“I say that because we need to improve on last week (when they lost to Western Magpies) and execute our processes much better.”

Sandgate have run into a horror injury run, with the result the Hawks have seven changes for the trip down the M1, five forced by injuries.

They are without Brendan Forbes (broken leg) and Liam Rutledge (fractured cheekbone) for the season, they lose Pat Walton (hamstring), Jacob Hipwood (hamstring) and Dan Dai (calf), Kurt Adams has been dropped and Aaron Fabian is still in clearance dispute with NEAFL club Aspley.

On top of this Sandgate do not have aq good success rate at Small Park.

“It’s horrible, I believe, and I don’t think we have won there since I’ve been coaching,” Long said.

Wilston Grange are coming off a very convincing win over Noosa last round and seem to be playing a more consistent brand of football over the past couple of rounds, at best their early season form was patchy.

The Gorillas have finally been able to put a balanced team on the track with Steve Brittain, Fletcher McIvor, Brenton Ogle and Matthew Trewhella all playing very well.

After a slow start the Roos have strung 4 wins in a row and are playing with a lot of confidence.

Jarrod Gale, James Page, Jed Turner and Kane Tyson are all in good touch but it will need a big Team effort by Maroochydore to keep their winning streak alive.

Playing at home on Sunlinc Oval it’s hard to see the Gorillas losing this one but they will need to be at their best to stop the Roos.

HISTORY suggests Burleigh are in with a great chance to crack their 2012 duck when they play Springwood at Bill Godfrey Oval.

Burleigh have a commanding record against Springwood in matches in the Bomber hanger, winning 10 of the 11 matches played there since 2000 when the AFLSQ competition was formed.

Springwood’s only success in that time was late in 2001 and since then they have lost nine in a row there.

But the Pumas do look a different proposition now with former Brisbane Lion Albert Proud and his ex-Mt Gravatt teammate Ethan Reading on board.

Nathan Sullivan and Matt Deidrich are the only definites to come in as replacements.

New Springwood coach Tony King was not aware of Burleigh’s bogy over his side, but is not one to worry about that side of things.

“I don’t really think about things like that but now that you’ve mentioned it …..” he said.

Springwood have lost utility Matt Hockley (broken hand) for the remainder of the season but regain Michael Grose and full-back Matt Preston-Smith.

For Mayne the match against League Leaders Western Magpies is a real test of their finals potential.

They have only beaten one side above them in the first half of the season (Surfers Paradise in round 1) but have been more than competitive against Wilston Grange, Palm Beach and Noosa.

The Magpies on the other hand have only lost one game when they went down to the Gorillas in the mud in round 3.Since then their form has been consistent and impressive.

Anthony Corrie leads the goal kicking with 46 goals and will be a handful for whom ever gets the job of minding him. Other Magpies in good recent form are Sean Mewing, Tim McEvoy and Brenton Saunders.

The Tigers have their share of talent also with Adam Stevenson, Luke Faulkner, Stuart Vimpany and Andrew Housego all playing good football.

The game will be played at a cracking pace and should contain plenty of highlights.

The Magpies will start hot favorites but will have to really earn the 4 points.