Tassie down Scorpions in U18 clash 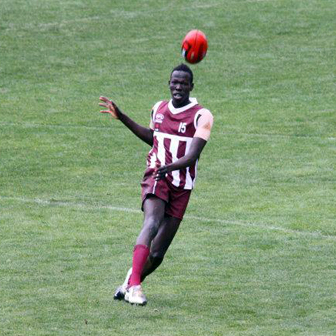 It was a case of what could have been for the Scorpions who controlled play for much of the game and had 7 more scoring shots than their opponents.

A physical opening term saw both teams hard at the ball. Tasmania drew first blood but a strong mark from Wardle in front of goal had the Queenslanders on the board.

Tasmania scored the last two goals of the quarter to see them 10 points up at quarter time.

A clever goal from Cain Tickner early in the second term followed by a mid-term 50 metre bomb from Jordan Bourke saw the Scorpions take the lead for the first time.

Queensland dominated play, tackling hard and winning plenty of contested football.  But the home side squandered opportunity after opportunity in their forward fifty to kick a disappointing 1.10 for the quarter.

By comparison a thrifty Tasmania kicked 2.1 to give them a two point lead at the big break.

The third term again saw plenty of action in the Scorpions forward fifty but backline pressure from a quickly improving Tasmania put paid to any hopes of a major score.

The Southerners booted 3.3 for the term, restricting Queensland to just one point and the Scorpions went into the final term 11 points down.

Queensland came out swinging in the fourth quarter but missed several early opportunities in front of goal before Jordan Bourke finally snapped a major.

Tasmania answered back and it looked set to be an arm wrestle to the finish.

Queensland fought hard and had the lead pegged back to two points in the dying minutes of the game before a  50 metre penalty resulted in the final goal of the match for Tasmania, the final score line reading Tasmania 9.17.61 to Queensland 6.17.53

Disappointed Queensland coach Ray Windsor said his team had strayed from their one-on-one style of play.

“Our objective was to play contested footy and we went away from it and it cost us at the end of the day,” said Windsor.

“No matter how many points we kicked versus goals, contested footy is our forte and that’s where we let ourselves down today.”

With Queensland dominating the stats Windsor said his charges could take some positives from the match.

“We won in all the stats in all areas that is a positive,” said Windsor

Queensland has a week to regroup before they take on the Northern Territory at Visy Park.

“We’ll do a full on recovery try and get our positivity back in the group,” said Windsor.

“ It’s very deflating after a loss like that but we need to get everyone focus and back to the way we play.”