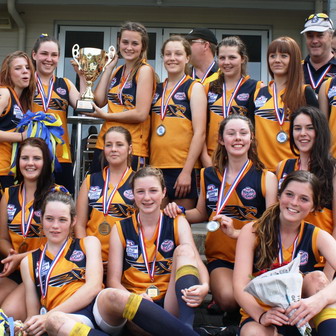 The two teams had polar opposite finals journeys with Kawana Park going through the season undefeated while Noosa battled their way to the Grand Final with two hard fought wins against Maroochydore and Coolum.

With the promise of some gutsy footy a crowd of around 400 spectators flocked to Noosa’s Weyba Road to watch the action.

Noosa’s accuracy afforded them a 2 point lead at the end of the first quarter despite Kawana having more scoring shots.

The teams piled two goals a-piece onto their scores in the second with roles reversed by half time and the Eagles pulling two points ahead.

The premiership quarter rolled around and both teams rose to the occasion with some fierce tackling and endeavour at every contest.

Despite the hard contests, Kawana were able to add 1 goal and 4 points to their total in the third while keeping Noosa scoreless.

Kawana Park coach Adrian McCormick praised his inexperienced team for coming together to take out the inaugural premiership.

“I couldn’t be prouder of a bunch of girls that only really came together 12 weeks ago and most of them hadn’t even played before,” Mr McCormick said.

“The passion they showed I think was really obvious to anyone that watched.”

“The girls really gave it their all which was evidenced by the outpouring of emotion from both teams at the completion of the game,” Tresise said.

Kawana Park’s Brooke Kerrigan was awarded the best on ground medallion for her impressive display out of centre-half back.

In a coup for Sunshine Coast female footy the game was also umpired by 17-year-old Emma Dunn who has played junior football in Maroochydore for a number of years.

Six teams and around 100 players participated in the first season of Youth Girls Football on the Sunshine Coast this year with plans to expand in 2013.

“The introduction of Youth Girls football to the AFL Sunshine Coast community has been extremely successful in 2012 and we are hoping to build on this in 2013 with the inclusion of and Under 18 competition, alongside the Under 15 age group,” Tresise said.
And with a number of Kawana’s premiership players hailing from Chancellor Park State College, McCormick hopes the Grand Final win will motivate other schools as well.

“A lot of the girls were recruited through their classmates and hopefully it gets more schools involved, with girls and boys footy,” McCormick said.

“It’s only in its first year, so it’s got a good foundation to grow.”
And will Kawana be back to defend their title in 2013?

“Most of the girls are really keen to play,” McCormick said.