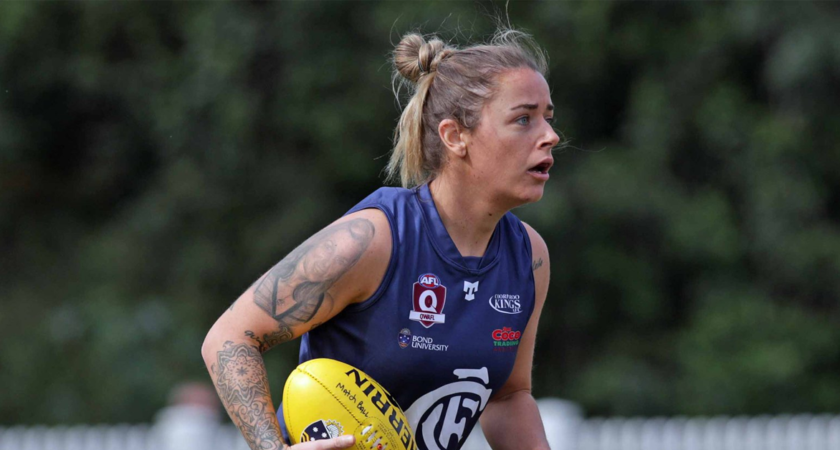 It’s nearly a given each year that the Kings will be one of the final two teams remaining to compete in the season’s final game.

That’s not just a nice sentiment either – that’s fact. Since 2013, there have been seven Grand Finals in the QAFLW including this Sunday’s decider between the Kings and Bond University.

Coorparoo have been apart of all but one of them.

RELATED: Eight players that could determine the QAFLW Grand Final

But while Coorparoo have seemingly become a main stay in the big dance, success on the day in recent years has often eluded them.

After winning a threepeat of premierships from 2013-2015, the Kings have failed the lift the cup in both 2017 and 2018. It’s a genuine case of always the brides maid; never the bride.

But for Coorparoo spearhead Jess Wuetschner, who has been a part of those two Grand Final losses, the pain of Grand Final day runs even thicker than that.

This Sunday will be Wuetschner’s sixth Grand Final in four years. Of the five she has contested prreviously; she is yet to win one.

Her Grand Final resume reads: losses to Wilston Grange and Yeronga in 2018 and 2017 with Coorproo, losses to Adelaide and the Western Bulldogs in 2017 and 2018 with the Brisbane Lions at AFLW level and a loss to Swan Districts in the 2016 WAFLW season with East Fremantle.

And while a premiership may still elude her, the 27-year-old sees this weekend as an opportunity not only to win a premiership but to enjoy one last game in 2019 with her Kings teammates.

“Look, I try and not think about the fact that I have lost that many in a row,” she said.

“I don’t think that it’s good for me personally to come into a Grand Final thinking ‘what if I lose again’.

“It’s not what we’re here for and if we can put in a full team performance on the park and really enjoy the game and really enjoy each other’s company then whatever happens I’m really happy with that.

Wuetschner’s Coorparoo have soared in the Grand Final after finding themselves sixth on the ladder after Round 11.

With a blend of experienced heads and fast-rising young talent along with a handful of players who have shone on the AFLW stage, Wuetschner is quietly confident this could be the year both she and Coorparoo finally break the duck.

“You’ve gotta hope so don’t you. I think we have the team to do it,” she said.