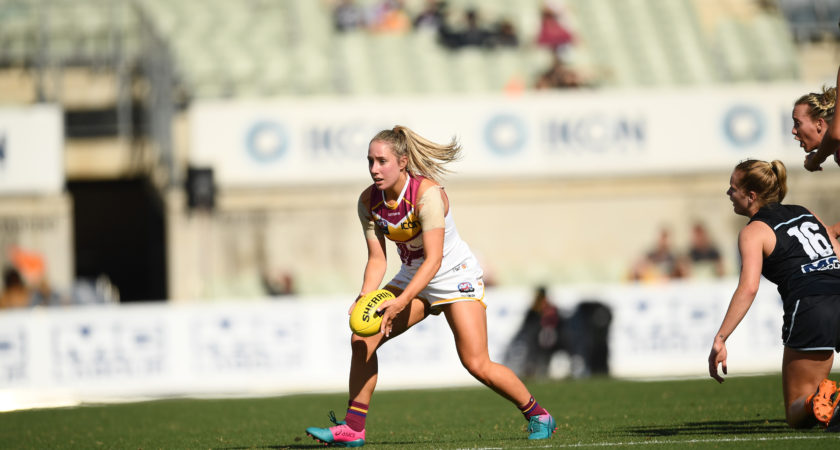 Brisbane Lions midfielder Jac Yorston has been awarded a NAB AFL Women’s Rising Star Nomination after a commanding performance in the Lions’ Round 6 loss to Carlton at Ikon Park.

Yorston collected 12 disposals and laid six tackles in what was perhaps her most complete performance of the season.

Her nomination is the Lions’ first of the season and fifth in competition history following Tayla Harris and Sabrina Frederick-Traub in 2017 and Sophie Conway and Tahlia Randall in 2018.

After being selected by the Lions with pick 71 in the 2018 NAB AFL Women’s Draft, Yorston made her debut for the club in their Round 4 win over the Western Bulldogs and has played every game since.

The Wilston Grange product has already earned a reputation in AFLW circles as a pressure midfielder with her craft highlighted by her tackling prowess, including her nine in her debut game.

Yorston began playing at the Kedron Lions six years ago before joining the Wilston Grange Gorillas where she played in the side’s 2018 QAFLW Premiership.

At representative level, Yorston was an integral part of the Queensland midfield at Under 18 level and won the most disposals in the team’s historic win over Victoria Metro at the 2018 NAB Under 18 AFLW National Championships.

Yorston also earned a place in the Under 18 All Australian squad and featured in the Brisbane Lions’ Winter Series squad last year.

All AFLW players 21 years and under as at 1 January 2019 and who have not previously been nominated as a rising star qualify for consideration for the award.

Two players will be nominated each week of the NAB AFL Women’s season. Each of the 14 NAB AFL Women’s Rising Star nominees throughout the season will be awarded $500 prize money from NAB to acknowledge their great achievement. In addition, NAB will continue to support the development of future footy stars by awarding junior clubs of each nominee with a NAB Club Recognition Award pack of practical and financial resources, valued at $2000.

The overall NAB AFL Women’s Rising Star winner will be awarded $20,000 from NAB and a private banker to assist with securing their financial future.

NAB is proud to support the development of female footballers throughout the country from NAB AFL Auskick through to the NAB AFL Women’s Competition.