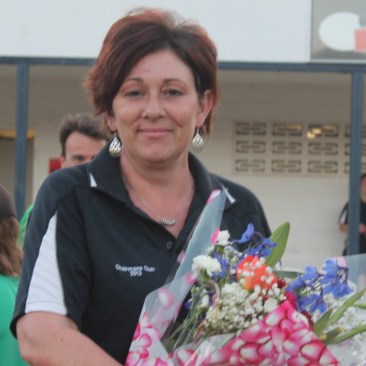 Nambour football club is mourning the loss of club stalwart, Dionne D’elton, who passed away this week.

Forty-three year old D’Elton lost an eight-year battle with cancer on Tuesday November 5, but left a major impact on the Sunshine Coast club.

D’Elton, whose six sons Keenan, Rohen, Mitchell, Brock, Cooper and Noah have all played at the club, had a number of roles over her six-year involvement.

Ranging from head strapper to canteen coordinator, D’Elton took up the office of vice president in 2013 and president this season, despite her illness.

Even as her illness became more severe, D’Elton was on the sidelines strapping players up, a constant inspiration for those around her.

She was never far from the footy club, spending every weekend watching her sons play.

Dionne will be survived by husband, Ross, her six sons and daughter, Aingeal.

Mark Schreiber, Nambour’s president in 2012 and 2013, paid tribute to Dionne this week.

“Dionne’s presence around our footy club will be greatly missed,” he said.

“Her appetite for work was immeasurable not only on training nights but also game days and she was often the first to arrive and one of the last to leave.

“My lasting memory was last season, almost crippled with cancer, she still found the strength to strap up players before matches.

“That was a sign of her true dedication to the game.”

A funeral service will be held for Dionne at Gregson and Weight’s  Chapel, 34 National Park Rd, Nambour, on Tuesday November 11 at 1:30pm.

Upskill in Draft Week
AFLQ staff getting their mo on