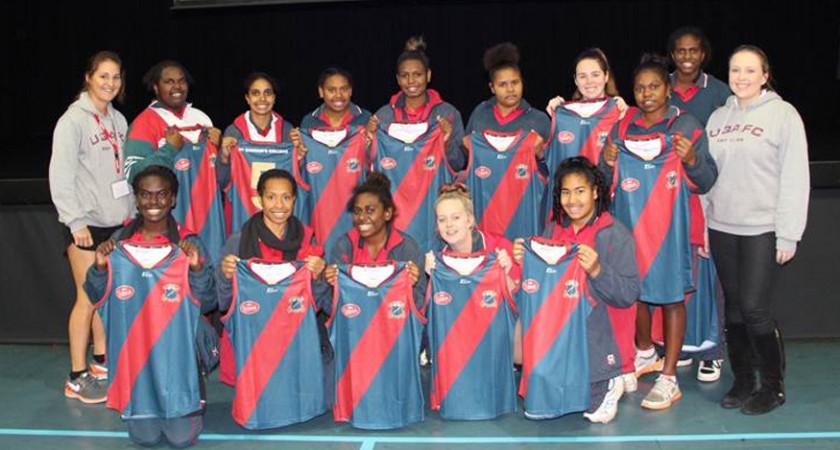 The UQ Red Lionesses have recently shown just how generous the footy community can be.

A few months ago, they found out that the St Saviour’s Catholic Girl School’s football team didn’t have their own jerseys, and immediately went about changing that.

QWAFL player, Sinead Hastie, headed a drive to see if they could get some of the players and club members to reach into their pockets and cover the costs of a set.

She didn’t have to push very hard. Before she knew it, everyone was on board with the idea.

“We asked any girl that wanted to, to chip in for the cost of the jersey. We got them at cost price thanks to the generosity of David Lake at Tribal Sport. I think we had over 35 girls put their hand up to donate,” Hastie said.

The decision for UQ to support St Saviour’s was a no-brainer.

“The fact that they are starting an AFL team in the school is a really good initiative. To me, a team where they are mostly indigenous, its great cause to support, and we have a big connection with Darling Downs with a few of our players,” Hastie said

“It really meant a lot for those girls to chip in and to start forming connections with junior clubs as we don’t really have one at the moment.”

Mark Gillespie, St Saviour’s VET and Careers Coordinator, and the man behind the AFL program, said the school and the students were astounded by the generosity shown by UQ.

“Totally overwhelmed in reality. They are a group of players nowhere near us, with no obligation to do something about it, but felt as if it was $20 dollars well spent,” he said.

The presentation of the jerseys happened on the day of St Saviour’s grand final, a game in which they would go on to win in spectacular fashion.

“It was inspirational. They received them on the night of the finals. They were thrilled to bits about it, you could see them glowing with pride. I think that they had that much more pride in themselves, and who they were playing for as a result,” Gillespie said.

A sentiment backed up by Hastie.

“You could see the look on their faces when we saw them on Friday that it definitely meant a lot to them, because they got to play the game that they love,” she said.

“One of the girls said I’m going to feel so invincible playing in this jersey, and one of the teachers said to us afterwards that you never hear her say anything, so that really touched a nerve with her.
The connection they have formed is one that both parties hope continues in the future.

“I’d like to think so, I think if the girls go to Brisbane next year, especially the older ones, if they go to University or Colleges, there is definitely the opportunity for the connection to continue,” Gillespie said.

Football clubs are fantastic at given back to the community. Even though there are a few kilometers separating UQ and St Saviour’s, there is a now a connection formed that will continue to grow over the coming years.

Sunshine Coast Juniors 2015 honours
Grab Your Friends and Get Active