Under-18 Scorpions vs. Tasmania 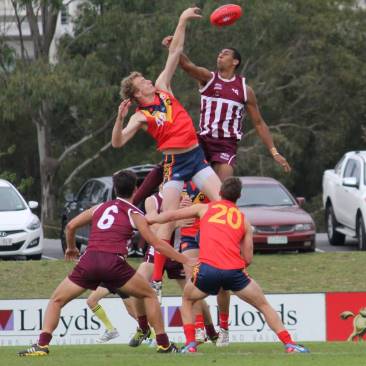 The Scorpions face Tasmania in Rd 3 of the NAB AFL Under-18 Championships tomorrow.

The Queensland Under-18 Scorpions might be the hunted, rather than the hunter, against Tasmania tomorrow, but coach Ray Windsor said it wouldn’t change a thing.

Queensland faces the Apple Isle in their first match of the NAB AFL Under-18 Championships, following matches against Division 1 sides Vic Metro and South Australia in recent weeks, and will be favourites for the first time this season.

Windsor said higher expectations would not affect his side’s preparations.

“We’re expecting to go down there and get a win,” he said.

“That actually gives us more confidence as opposed to more pressure. We’re very confident that we’ve got the players to get the job done.

“It’s a bit more of a level playing field up against a Div two side, and from a player’s point of view it would be a bit different, but from a  coaching view, we approach the game same way as any other game.”

Windsor knows all too well how significant the opening match can be for a nationals campaign, after the Scorpions dropped their opener in 2012, and missed out on the under-18 title.

“History tells us it’s extremely important (to win the first match),” he said.

“We won all the other game and beat the eventual winners, in NT, but we lost the game to Tassie that we should never have lost.

“It’s just one of those things you’d rather get off to a good start.”

With a number of players still in the side from last year, Windsor said that 2012 loss would be in the back of their minds tomorrow.

“We are aware of it and it will be a focus to ensure we have a better approach (tomorrow) than what we did last time,” he said.

The match will be the second trip for the Scorpions this season, and the first interstate, but Windsor said he was confident that the side would handle the starkly different conditions in Hobart.

“It’s going to be different conditions from the  point of view of temperature, but once they’re out there and amongst it, the weather or the temperature doesn’t play any part at all,” he said.

Surfers Paradise’s Cassidy Haberfield returns to the side against Tasmania, in a move designed to bring extra intensity to the forward line, while Steven Coutts has also been brought in, after missing the match against South Australia.

Coutts will add some versatility to the Scorpions side, able to play forward, defence, or as a back-up ruckman.

Kade Kolodjashnij has been a stand out for the Tasmanians so far this season and will be a danger man for the Scorpions in tomorrow’s match, while ruckman Toby Nankervis and on-baller Eli Templeton will also be players to watch from the home side.

The match kicks off at 10:25am at Blundstone Arena, Hobart.

The sides for the game are below:

Winging it: Bye week
WA too strong for Queensland women