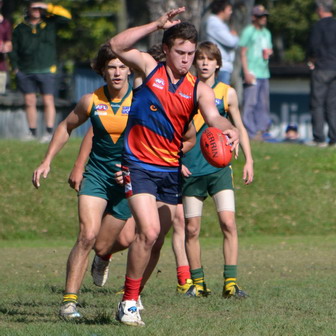 Minor Premiers of the U18 SEQ Central Conference the Darling Downs Crows will face the in-form Kenmore Bears in the second of Sunday’s Double Header’s.

Darling Downs have had an impressive season, recording 13wins and 1 draw in 2012 and are coming into this game as hot favourites for the flag. What makes this even more impressive is that the Darling Downs are coming off two straight Wooden Spoons in QAFL Division 1 competition in 2010 and 2011.

Mean while Kenmore have strung together four straight wins since the Bears lost by 6 goals in Round 10 at the Bears home ground. The Round 10 clash was moved to Kenmore’s home ground due to the Toowoomba Regional Council closing the entire region’s sporting fields.

This will be Kenmore’s first trip to the garden city in quite a few years and will need to adapt to the large surrounds of Rockville Oval if they are a chance to stop the Crows juggernaut. Darryn Harkins is the go to man for the Bears down forward and kicked a bagful against Morningside, slotting five for the game.

Darling Downs will need to watch Harkins along with midfielder Harry Baldwin who is hitting his straps at the right end of the season.

For the Crows skipper Lochie Dignan is in outstanding form and has been well supported by Daniel Verrall, Tasman Myles and Stuart Huggins. The Bears will need to stop all four players influence on the game as all four are very damaging players for the Crows.

Add to this forwards Lachlan Thomas, Jack Rockliff and Adam Green and the Bears have their hands full. The Crows haven’t been able to field a full strength side all season and for the first time this year will put the strongest team on the paddock.

Kenmore are coming off an impressive 129point thumping of Morningside in Round 14 and will look to flex their muscles early and expose the Crows slow starts.

This will be an interesting clash between the two sides, old arch rivals. The last time these two sides met was back in the 2005 u18 Grand-Final where Kenmore ran out convincing winners. Can the Crows juggernaut continue or will the Bears spoil the Crows party at home.

Nothing separated these two sides during the season except a mere 18.11%, as both sides finished the home and away season with 9wins and 5losses.

This game will be a replay of the Round 14 clash played last weekend where the (Alex Hills) Bombers ran out 12.12 (84) to 8.6 (54) at Keith Surridge Oval. Seven individual goal-kickers for the game and a five goal opening term saw the Bombers fly up in the last regular fixture of the season.

Alex Hills also ran out three point victors in the Round 5 encounter at Leyshon Park, as Jayden Fry was the main man in both clashes and will need to be checked closely in today’s meeting.

James Rowe has also been in impressive form and seems to love playing Yeronga as he has been named best on in both clashes with the Devils in season 2012. On the hand, Brodie Wilson seems to be the go to man inside 50 for the Devils and the Bombers will need to send their best defender to the classy forward.

Henjack and Koch have also been in goal-kicking form this season kicking 30 goals between them in a supporting role to Wilson.

Alex Hills have the league leading goal-kicker in Corey Bastian up forward; Bastian has kicked 45 goals from 14 games this season and picked up another handy 3 in last week’s clash. The Devils will need to watch the Bombers goal kicking machine that can turn the game on his own boot.

Rockville Oval hasn’t been a happy hunting ground for either side this season, with home ground advantage out of the picture it will be whichever team travels and prepares the best that will continue on in season 2012.