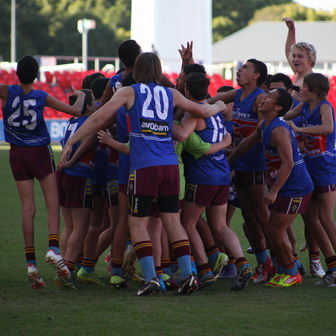 Over 2000 participants from 120 teams competed for one of the three finals places in the following categories: Year 8 & 9 boys, primary school boys and primary school girls.

Finalists in the primary school divisions competed in a round robin competition. The Gold Coast’s Caningeraba State School were too strong in the Girls division with Townsville’s Annandale State School finishing second and Rockhampton Girls Grammar rounding out the final three.

The fight for the year 8/9 Boys title came down to St Augustine’s College, Cairns, Mercy College, Mackay and Keebra State High School from the Gold Coast.

With Mercy College eliminated after the round robin competition it was left to Keebra Park and St Augustine’s to slug it out on Metricon Stadium’s main oval for the major prize.

Keebra Park settled quickly and was first off the blocks bagging two straight goals. St Augustine’s steadied and a running goal followed by another 6-point set shot late in the first quarter had the teams 2.0.12 each at the first break.

The second term saw both teams hard at the ball with both desperate to gain the upper hand. Keebra Park came out on top scoring the only goal for the quarter to see them lead 3.2.20 to St Augustine’s 2.2.14 at the main break.

St Augustine’s evened scores with a quick goal early in the third quarter but Keebra Park dug deep and scored two more majors to give them a 12-point lead at three quarter time.

Keebra Park went from strength-to-strength in the last quarter, their bigger stronger bodies proving the difference between the two teams.

St Augustine’s continued to fight but the Gold Coast team kicked away, the final score-line reading Keebra Park 8.4.52 to 4.4.28