U-18 Rogerson leading the way 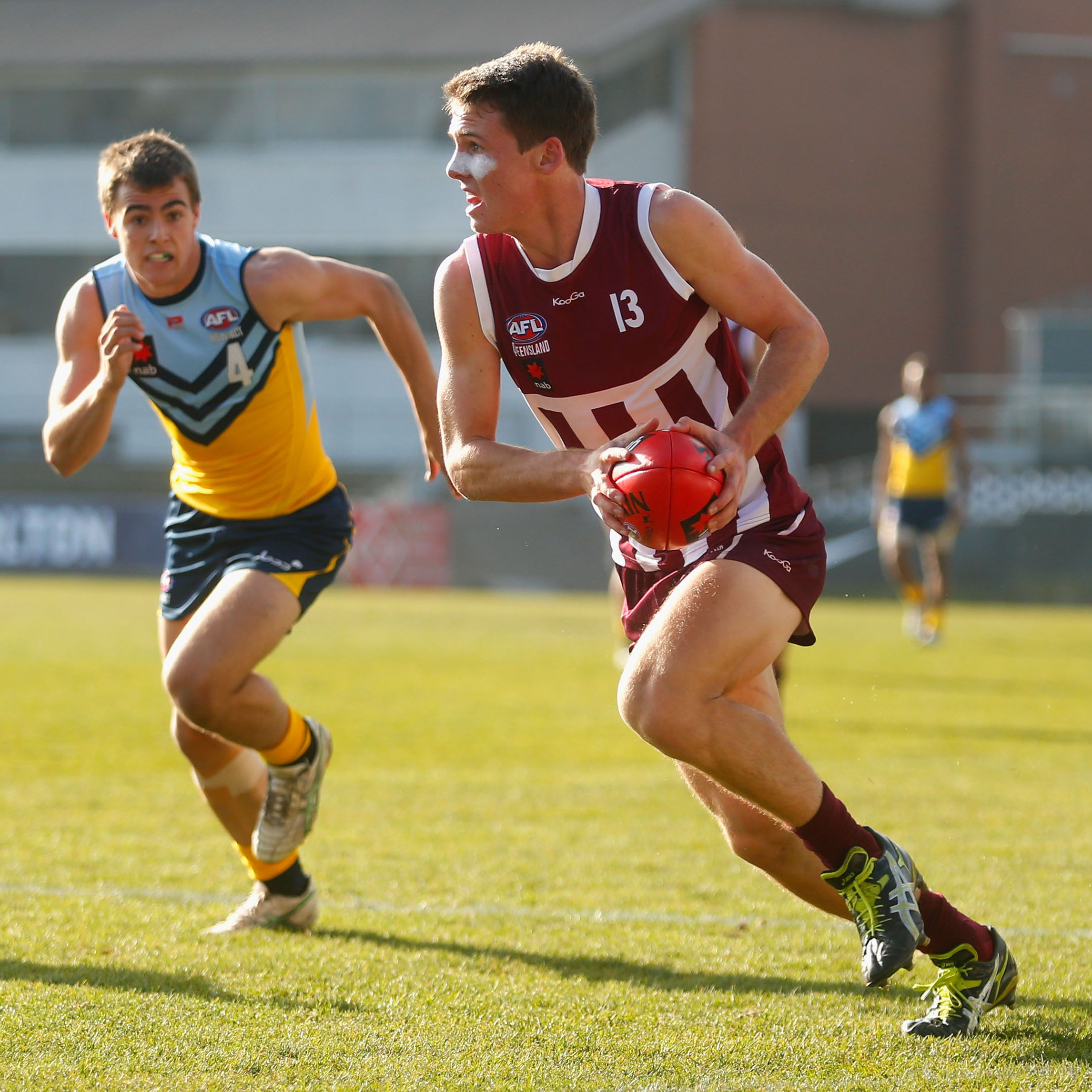 Luke Rogerson will line up for the Scorpions on Thursday, having played in every Queensland match this year.

Rogerson was one of the Scorpions’ best in their win over NSW/ACT on Saturday, finishing with 20 touches.

The vice-captain, and one of the side’s most consistent players, hasn’t always been in such a privileged position, though, on the fringes of selection in the past.

“I’d be one of the last five guys picked each week.”

After missing out on U16 selection in 2011, Rogerson said he focused on harnessing his strengths, in the Lions Academy, and working towards state U18 selection.

“I always look at it as controlling the controllables, and those things are my leadership and attitude to training, rather than the outcomes,” he says.

“If I just get all the processes right, then I know the outcome will take care of itself.”

While Rogerson has really come into his own this season, it’s not just his skill that has earned him raps in the football fraternity.

Mature beyond his years, Rogerson made a huge impact after only months at the Bombers, named in their senior leadership group.

Rogerson’s team-first attitude has contributed largely to the esteem in which his teammates hold him.

“My main focus is on leadership, those little things to make my teammates better,” he says.

“If there’s any little thing I can do to get my teammates getting confident and make us a better team for it.

“I’m one for hi-fives and getting around your teammates and I feel like I can be strict when it needs to be, when someone needs to be pulled up.

“I feel I like I’ve got the respect of my teammates and I’m striking that balance as far as leadership’s concerned.”

Rogerson has shown ability in senior football, picking up the NEAFL Northern Conference Round 9 Rising Star nomination, and says that experience has seen his footy improve rapidly.

“There’s no doubt in my mind that I’m a better player for having experienced NEAFL footy,” he says.

“I’ve been fortunate that the guys out at Redland have shown faith in time and it’s paying dividends at the moment.”

Rogerson’s pragmatic attitude to his footy might come from his parents, who have always encouraged him to have an alternative path to footy.

“Mum’s always said to me,  ‘Have a real crack at footy, but always have something to fall back on,’ and she’s been important in keeping my feet on the ground,” he says.

“Dad is always there to bring me back to earth or if I’m getting down on myself,” he says.

Rogerson is currently studying a Bachelor of Business, but it’s clear footy is his passion.

“I’m lost when footy season’s not on,” he says.

“It’s hard to explain (why I love footy).

“When you’re with your mates and you’re out on the field, you’re not thinking about anything else out there.

“Nothing beats the adrenaline in a match, when you’ve got the footy in your hands – I get a real kick out of it.”

With nationals wrapping up this week, Rogerson says the opportunity to play AFL is in the back of his mind, but he’s not going to let it distract him.

“Progressing through the years, it’s become closer and closer and gets in the back of your mind and you start to think about it.”

Rogerson is well aware that the hard work isn’t over when the final siren goes on Thursday.

“Nationals are just a stepping stone,” he says.

“I’ve got to perform alright there but, the most important thing, is to go back to Redland and have a strong finish.

Having played with Collingwood’s Adam Oxley at the Bombers last season, Rogerson said it was reassuring to know this year wouldn’t necessarily be the be all and end all for his AFL aspirations.

“I’ve always considered, for Queenslanders, your draft window is more like two years after your actual draft year,” he says.

“I don’t think you want to take the pressure off. It’s a good thing in some ways,” he says.

“But it gives you confidence that if it doesn’t quite work out the traditional way, there’s other avenues.”

While he has prepared for all possibilities, Rogerson says he would embrace any opportunity to play on an AFL list.

“It’d be unbelievable and you always talk about it, which club you’d want to go to,” he says.

“To be on an AFL list would be amazing and if I was given the opportunity I would take it with both hands.”

The Queensland Under-18 Scorpions wrap up their 2013 nationals campaign, against NT on Thursday July 4 at 11:00am at Victoria Park.