Tigers too strong for Lions 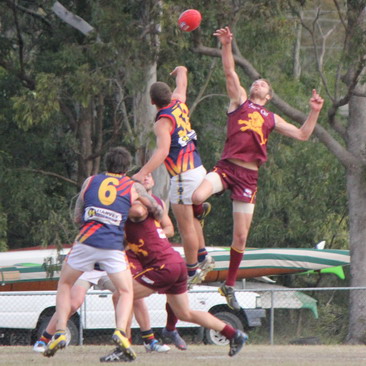 PALM Beach-Currumbin coach Daryn Cresswell is set to wield the axe on the back of another tame effort from the Lions in Saturday’s grand final rematch against premiers Noosa at Salk Oval.

After the Lions lost by 15.18 (108) to 14.12 (96)  their second failure against genuine flag contenders this season  former Sydney Swans hardman Cresswell described some of his players as “flat-track bullies” and “downhill skiers”.

“In all honesty, it was probably the softest effort I’ve seen from a football side,” Cresswell said.

“I have a lot of respect for Noosa the way they go around things, and that’s why they’ve been so successful.

“Our blokes’ discipline is bordering on poor. It’s something I’ve tried to change but things don’t change overnight.

“When things are going okay, they’re all right. But when the boot’s on the other foot they go missing.

“Old habits die hard and heads need to roll, unfortunately. It’s not younger players, it’s older players who have been around the club for a while.

“Stay tuned for next week to see who’s going. And if they don’t like reserves they can walk.”

Cresswell’s stunning outburst is a timely one given the Lions have to play Western Magpies (away) and Surfers Paradise (home) in their next two engagements. Yet for all of Cresswell’s outburst, the Lions lost by only two goals after Noosa jumped the home side with an opening term of 6.3 to 0.2.

Given the final margin was 12 points that was a damning statistic for the Lions to ponder.

Then there was a high-scoring final stanza when Noosa put on 7.11 to 4.5 after they trailed by two goals at three-quarter time. Match numbers reveal that Noosa scored a combined 13.14 to 4.7 in the first and last quarters, PBC scored 8.5 to 2.4 in the second and third terms.

“There was a lot at stake,” explained Noosa coach Wayne Fletcher when asked why the Tigers were so hot to trot from the first bounce.

“It was important for us to bounce back after our effort against Wilston-Grange,.

“And it was the skipper Adam Bovalino’s 100th game for the club, so it was a special day for him.

“He is held in high regard by his teammates and a lot of other people connected with Noosa footy club.”

Noosa lost momentum when they lost ruckman Peter Trompf, who has ongoing upper thigh and ankle problems, before half-time. But once the Tigers sorted things out, using veteran Brett Duke in the ruck, they warmed to their task.

“In the last quarter every player stood up to be counted and put in special efforts to get us over the line,” Fletcher said.

AT Sir Bruce Small Park, Surfers Paradise flew the flag for Gold Coast sides, the only winners of the local clubs after they downed Sandgate by 13.14 (92) to 8.12 (60).

The Demons had a tough time of it up to half-time, but a third term of 4.3 to 1.4 put them in the clear as Kris Rizzo, Ryan Dienjes and Jake Ryan led the way. But until the second half lift, coach Beau Zorko thought his Demons had been butchering the ball and wasting far too many opportunities.

“Our decision-making wasn’t the best and the execution wasn’t where we needed it to be,” he said.

“I thought apart from the first 15 minutes of the third quarter, when we really opened up, that we played fairly average football.

“Look at our conversion rate. We had 13 goals from 27 scoring shots. It should have been something like 18 or 19 goals.”

Sandgate coach Ben Long thought his Hawks matched the Demons for the first half, but they eventually bowed to a Surfers side that had more quality performers.

“Our goal was to be competitive all day after last week, and we probably were, but Surfers had the edge through a couple of their class forwards,” Long said.

“They had Korey Fulton as a constant pressure up front. We didn’t have that in attack,” he said.

SPRINGWOOD broke their Bill Godfrey Oval hoodoo with a big win over Burleigh.

But the win came at a price. The Pumas may be without Mt Gravatt signing Ethan Reading for a while after the ruckman-forward left the ground in the third term with a quad strain. Reading had kicked six goals to that stage.

And club football manager Adrian `Bear’ Wallin, who has done a good job helping out at full-forward, may not play again after snapping an achilles tendon.

The Pumas set the victory up with a big first quarter when they outscored the Bombers 6.4 to 1.4.

“?They threw everything at us in the first 10 minutes, but the boys showed good composure and a bit of self-belief,” said successful coach Tony King.

Half-forward Jacob King, middleman Matt Thompson, wingman Michael Grose and onballer Albert Proud, who continues to light up the Pumas attack, were best for the winners.

For Burleigh it was standout defender Tim McKay who was again best, aided by T. McKay, Sam Brown and Dean Martin.

Western Magpies remain on top of the Pineapple Hotel Cup ladder after a strong 2nd half performance against a much improved Mayne Tigers. Less than 3 goals separated the two teams at half time however the Magpies stepped up a notch after the main break kicking 10 goals to 4. The final score was 19.12 (126) to 10.9 (69).

Ben Heffernan-Roper put in a strong all round performance earning Best on Ground accolades, Val Pope and Kale Reid kicked 5 goals each and Tim McEvoy played well in the middle.

For the Tigers John Seccull was best with Andrew Housego, Luke Faulkner and Tom Falconer all playing well.

Mayne Coach Mitch Ferguson was generous with his praise for the Magpies, “they played hard and were very nippy when the ball hit the ground. Their defense surprised me, they kept our main forwards very quiet.” he said.  “We are far more competitive than last year however we need to field our best team against the top Clubs or we come up a bit short,” he concluded.

Magpies Coach Peter McClennan was happy with the way his side stuck to instructions, “we kept our structures and played our zones all day, which helped when Mayne got a bit tired in the last term, we still have a number of quality players to return from injury so I’m pretty happy with where we are at the moment,” he said.

Steve Brittain turned in another fine performance even though he wasn’t 100% well bobbing up with 5 goals, Matt Pardew was strong in defense but it was Daniel Campbell who got the nod for BOG with a strong all round performance.

Although the win seemed relatively comfortable Gorillas Coach David Martin was far from happy, “we tended to over use the ball and we were a bit scrappy, we had the lions share of possession but wasted a lot of chances,” he said.

The good thing was we can out of the game injury free and with the bye next week we are looking forward to the return of Lee Smith, Tristan Higgs and Dan Brittain from injury.

The Roos have shown improvement each week and their young side are just a couple of players away from being really competitive at the top level.

Tassie down Scorpions in U18 clash
AFL Celebrates Multicultural Round