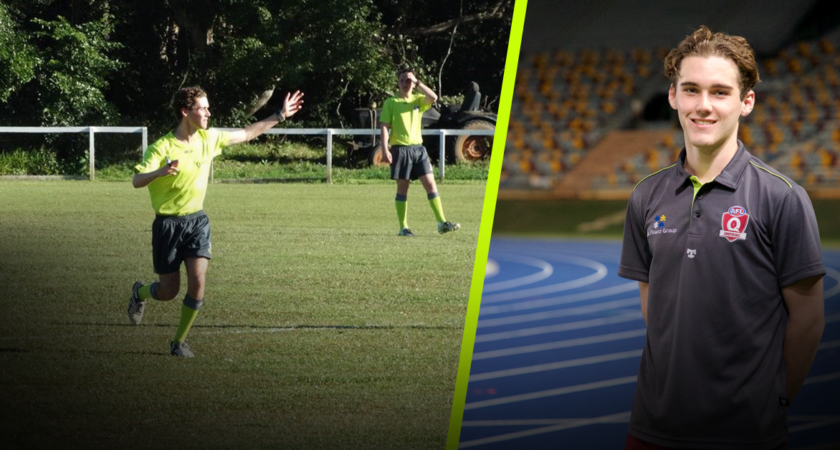 The Sunshine Coast remains rather unfamiliar territory for the NEAFL.

Unlike the Gold Coast or the surrounding Brisbane suburbs north and south of the brown snake, the Sunshine Coast doesn’t boast any teams that compete in the semi-professional competition.

But that doesn’t mean the region is totally foreign to the league. The first game on the Sunshine Coast was held at Maroochydore in 2018 and current-Brisbane Lions Eric Hipwood, Jack Payne and Tom Fullarton all plied their craft there in their formative years.

And this weekend, the NEAFL’s presence will grow yet again.

The Brisbane Lions will host GWS GIANTS this Saturday on the coast – a game likely to feature both Payne and Fullarton – but the occasion is memorable for one other reason too.

Emerging field umpire Jono Angus will make his NEAFL umpiring debut in the Sunshine Coast clash at Maroochydore Multisport Complex – a venue just a short drive from where he grew up.

A Sunshine Coast local, Angus grew up in the region and even learned the umpiring craft at the same ground he will commence play this weekend.

Having found out of his appointment to the game on Tuesday afternoon following a call with AFL Queensland State Umpiring Manager James Waldorff, Angus said the surprise was a genuine shock, although it was something he had been hoping would happen throughout the 2019 season.

“When I got the call, it was obviously a great surprise and also a bit of a relief that all of the time that I’ve put into this season is coming to fruition,” he told aflq.com.au.

“It is definitely a surprise. This year I really have tried to step up the way I carry myself out on the field and the way I am umpiring to get to that next level.

“I’ll be trying to keep it in my head that it’s just another game of footy, but it is definitely going to be nerve-racking.”

RELATED: Maroochydore to host NEAFL in ‘festival of football’ this weekend

Angus’ umpiring career began in 2011 when like most, he took it up as hobby after injuries hampered his youth playing career.

He began umpiring with the AFL Sunshine Coast Juniors and quickly emerged through the ranks; even being named to a Grand Final in his second season with whistle in hand.

That game – a 2012 Under 12 Division 1 Grand Final between Coolum and Maroochydore is now a distant memory in contrast to this weekend’s new milestone, but the game still holds a special place in Angus’ heart.

“Part way through the game, the ball was kicked and when it came back down to the ground with a massive thud. It just stopped, and no one knew why it didn’t bounce,” he said.

“The guy kicked it that hard that the ball actually burst.”

Since then, Angus’s involvement in umpiring has progressed at a near unprecedented rate.

In 2015, he was named in the State Umpiring Academy and made his QAFL debut last year in the Round 3 clash between Sandgate and Palm each Currumbin.

His progression has now led him to this point – a moment which he described as the new highlight in his umpiring career.

And the locality of the game, in his own backyard, will make the debut all the sweeter.

“It’s incredible really. With no NEAFL teams playing on the Sunshine Coast, it’s not something that you ever think will happen.”

“It’s pretty incredible. My family are still based there they will get down to watch.”

A NEAFL debut this weekend is just another accolade in what is evolving into a breakout year for Angus, who earlier this month was named to the NAB Under 18 AFL Women’s National Championships on the Gold Coast in July

The Brisbane Lions v GWS GIANTS NEAFL clash will take place this Saturday, May 25 at Maroochydore Multisport Complex. The first bounce is scheduled for 11:30am.