STABILITY A KEY FOR SHAKRS 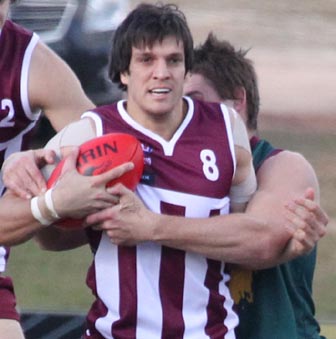 Southport coach Craig Crowley has encouraged his playing group to stick together and build up for a serious assault on the 2011 premiership.

The Sharks recruited a dozen new players into their senior line-up following an exodus 12 months ago and were knocked out of the QAFL finals series last weekend.

Crowley, who has coached the Sharks to two premierships, a runners-up and two thirds in five seasons, said stability within the player ranks was important for next season.

“When you look at Morningside, they only had three or four newcomers. That’s significant in their group. It stabilizes them and they jell,” Crowley said.

“I hope our guys stick together and they go to the next level next year. That’s totally up to themselves.”

The Sharks were stung badly by their capitulation to Mt Gravatt in the 2009 preliminary final and Crowley said the further pain from this season’s loss to Morningside should drive on the players.

“The hurt in any sort of final that doesn’t allow you to play in a grand final and win a premiership can work in your favour a lot of times,” he said. “If they (the players) can use it to the best of their ability, they might be able to get something out of it.”

Crowley denied the ‘bottom end’ of the Sharks’ playing list was the problem for the Sharks that saw them drop away as their rivals strengthened over the second half of the season.