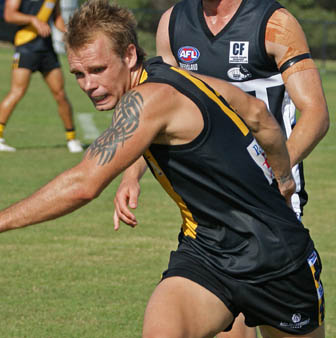 An inclusive club culture and player power helped Labrador attract some top-notch recruits who have helped the Tigers to an inaugural QAFL grand final berth on Sunday.

The addition of Nick Stockdale and Steve Wrigley to the Tigers defence has made an enormous difference at Cooke-Murphy Oval this season. Both arrived unheralded.

Coach Jarrod Field even admits the club was concerned at one stage about their inability to attract players last summer, despite Peter ‘Spida’ Everitt and Tim Notting being early coups.

While Field, Luke Black and Ryan Kogelman did plenty of leg-work, the coach tapped into every resource available.

“We used all the people available – players, committee and supporters – to cast the net as wide as we could,” Field said.

“Fred Sleeth and Curtis Allen played in Darwin over summer and they put us on to Nick.

“We didn’t know a lot about him but he has been a fantastic pick-up. Sometimes the players are your best asset with recruiting.”

While Stockdale was unlucky not to be named in the QAFL Team of the Year, Wrigley was.

Wrigley was working at the Mater Hospital and boarding with Russell Alleway’s parents in Brisbane.

“Russell told us he was a nice bloke who played a bit of footy and had been down the park to have a kick and seemed to have reasonable skills,” Field said.

“I tried to do some research but couldn’t find out much about him, other that he’d had an injury-interrupted year last season and finished up the season in the reserves at Blackburn.”

Field remembers Wrigley showing some good signs in a practice match against Morningside at Coolangatta, but he actually played reserves as late as Round 3 in the loss to Southport.

“Yes, we probably underestimated him early on,” Field admitted with a wry grin.

“I look back now and think ‘what the hell were we doing?”

Wrigley is likely to get the job on Austin Lucy in the grand final at Coorparoo on Sunday, while Stockdale’s return from a hamstring injury is critical to locking down on Shaun Mugavin.