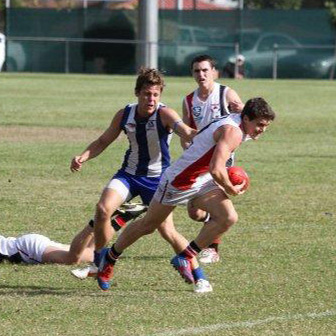 Three Queenslanders have been named in the medium midfielders state screening group.

Aspley’s Isaac Conway, Broadbeach’s Jarred Ellis and Morningside’s Ben McNiece have all been invited to the one-day testing in October.

To be included in this testing, two or more AFL clubs need to have registered their interest in the players.

Conway was the Queensland U18 Scorpions captain in 2013, and has produced solid form for the Hornets and the Brisbane Lions reserves in the NEAFL, playing through the midfield and on the halfback flank.

The 18 year-old played for much of the National Championships with a fractured scapula, but was still one of the state’s top performers in the championships.

Ellis had an interrupted start to the 2013 season, recovering from a shoulder reconstruction, but found some form late in the nationals competition

The teenager has played for both the Cats seniors and the Gold Coast SUNS reserves in the NEAFL this season, showing some strong form in the competition.

McNiece has been one of the rising stars in the NEAFL Northern competition this season, playing for the Panthers.

The 21 year-old represented the NEAFL in May’s match against the SANFL Under-20s and has shown incredible improvement in his first two seasons at the senior level.

Both Conway and Ellis were nominated by the Brisbane Lions and the SUNS, respectively, as possible Academy priority selections, with those nominations finalised on October 4.

The three midfielders join a list of Queenslanders who have been selected for the national combine or state screenings.

Panthers do it for charity
Volunteer spotlight: Penny Colenso