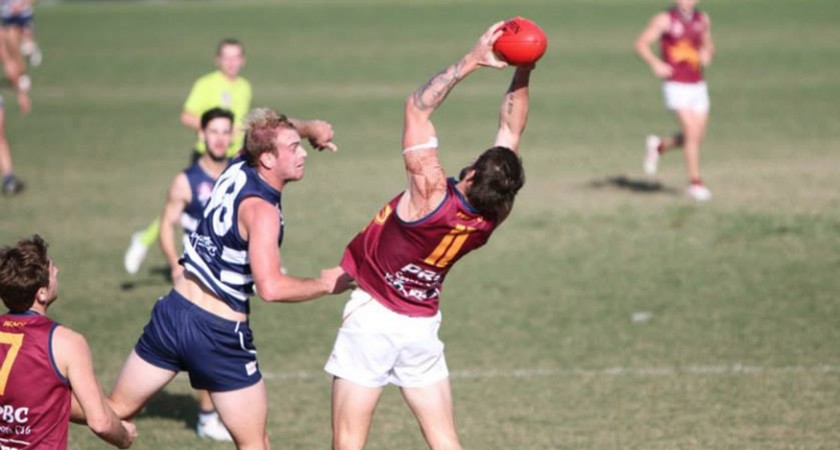 The midfielder is known for his huge grabs and giant leaps but was more proficient by foot this week for the Lions, hitting hard targets and opening up the game.

He used the ball superbly and was instrumental in his side’s 73-point trouncing of second-placed Morningside.

“My last two or three games have been down in the dumps and I’ve been working on little areas I need to improve on at training so that’s probably one of my better games for a while and I felt I did my part for the team, so it was good to get the win,” Woolley said.

Woolley played a defensive role on the day but it wasn’t all smooth sailing with the 23 year-old coming off with an ankle complaint late in the game.

“Somehow I jumped up for the ball and completely missed it,” Woolley joked.

“I came straight down and landed on the side of my ankle with full weight on it, but it feels alright now so I should be right for this week”.

It was Palm Beach’s first ever win against the Panthers.

“They’ve been the top team for the last 10 – 15 years and it’s finally good to knock that one off the shoulder and get it done,” Woolley admitted.

“That’s probably the best footy we’ve played all year, it was a good four-quarter effort which we’ve been trying to do all season and we’ve finally done it.”

Woolley has credited his move to the midfield as the catalyst for his success.

“It’s good to get a run in the midfield and get a lot more of the ball around the ground and push up forward as well.

“I thank Chad (Owens) for putting me in the midfield, it was a bit of a change but it’s helped me with my game and I’ve improved to where I am today.”

Woolley grew up in Tassie and played all his footy for Launceston before getting the call from previous Palm Beach coach Daryn Cresswell inviting him to make the move up to Queensland in 2014.

“Moving from Tassie is one of the better moves I’ve made.

“I’m really happy with the footy and how quick the game is up here compared to Tassie footy.

“The club has taken me on board like anyone else and it just feels like where I should have been in the first place really.”

This year is Woolley’s second with the club and he believes narrowly missing out on finals footy last year has spurred the club on to this year’s success.

“That’s motivated everyone and hopefully we can keep playing good footy and stay on top of the ladder, it gives us more of a chance to go the whole way.”

Even though the Lions are one game clear at the top of the table, Woolley says there is no room for complacency.

“I think we play better footy when we take that into mind and think we’re playing the best team.”

AFL Multicultural Round launched
Four countries, one game for Macanawai