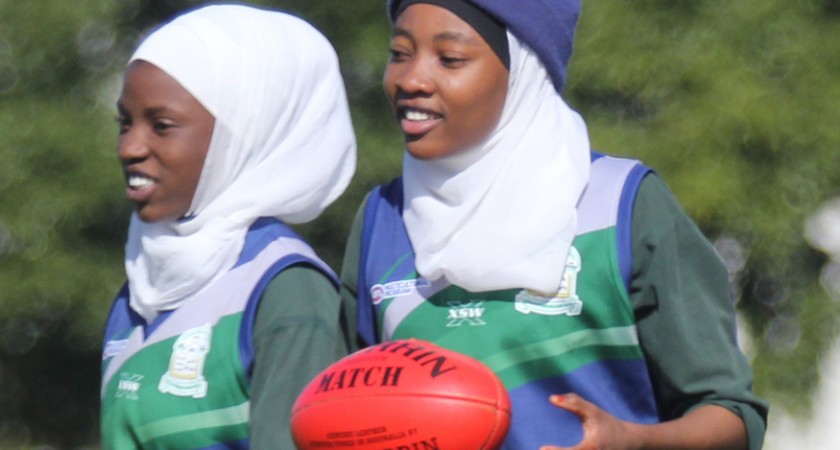 The AFL officially launched the 2016 Toyota AFL Multicultural Round today at the Female Orphan School in the Parramatta campus of Western Sydney University.

The Toyota AFL Multicultural Round highlights the contribution different communities have made to Australian Football, while highlighting the extraordinary power the game has in uniting all people of all backgrounds.

AFL Commissioner Gabrielle Trainor said the significance of the Female Orphan School in Western Sydney was not lost on her or the AFL.

“The Female Orphan School was built in 1813 and its purpose was to house and look after orphaned or deserted girls,” Ms Trainor said.

“It was the first welfare organization in New South Wales, and an early sign of the kind of society that Australians cherish – one dedicated to a fair go, with a decent social safety net.

“A young woman called Elizabeth spent ten years at the Female Orphan School in the early 1800s, and then went on to marry Horatio Wills, and they had a son called Tom Wills – who is widely credited as helping invent the rules of Australia’s first football code – Australian Football.

“It makes a lot of sense to launch our Multicultural Round in this place, a building steeped in the history of our nation, and connected closely to the birth of our great game.

“A reminder for all of us unless you are indigenous, we are all migrants to this land, and that in celebrating Multicultural Round, we are in fact celebrating the strength and success of our migrant nation,” she said.

Thanks to Telstra, all nine matches across Round 16 of the Toyota AFL Multicultural Round will be broadcast in one of seven languages available on AFL.com.au and the AFL Live App.

Program of matches below (all local times):

On Saturday July 9 from 11am – 7pm the AFL, GWS GIANTS and Australia Post are bringing the AFL Multicultural Festival to Sydney. Celebrating the many cultures who share a passion for footy, this FREE event offers rides, food stalls, AFL clinics, henna and face painters, multicultural workshops, Bollywood dancing, PLUS Justice Crew performing LIVE!

Happening in Cathy Freeman Park, Sydney Olympic Park (opposite the main entry to Spotless Stadium), the festival will run two hours before and after the GWS GIANTS v Collingwood match.

Australia Post is the official community inclusion partner of the AFL.

“We have a diverse workforce with 36,000 people from 136 nations. In fact, almost a quarter of our employees are from non-English speaking backgrounds. As an organisation, we are passionate about inclusion, acceptance and cultural diversity.

“AFL is a fantastic way to bring people together and build awareness, empathy and understanding of diverse groups as well as and break down personal and social barriers. Let’s work together to accept, embrace and celebrate each other’s differences every day to create a safe, inclusive Australia for all,” Mr Fahour said.

Highlights of the 2016 Toyota AFL Multicultural Round