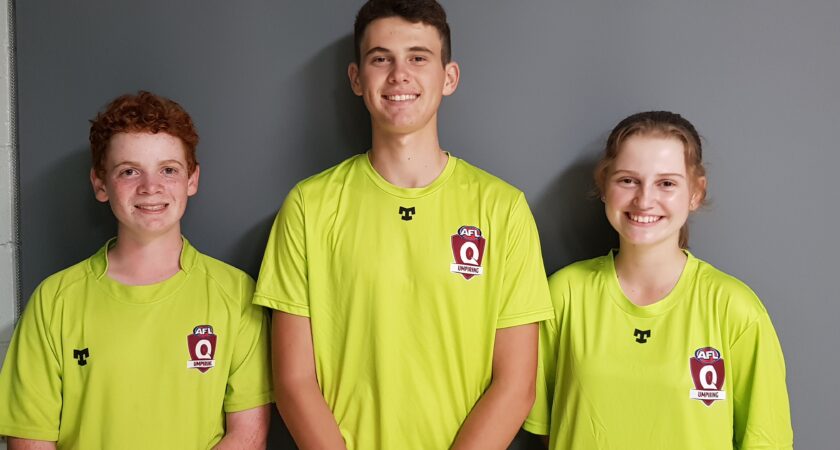 Under the bright lights of the Gabba, ahead of a blockbuster clash between the Brisbane Lions and Port Adelaide, three local league umpires from South East Queensland will pull on the lime green uniform and be a part of the action.

Amy Furness, Willem Kennedy and Patrick Reilly, all rising stars in the umpiring ranks, will lead the AFL umpires onto the grounds on Saturday night and get a taste of an AFL match-day experience.

It’s part of Community Umpiring Week, which is being celebrated during round seven of the 2021 Toyota AFL Premiership Season.

She’s only in her second year of umpiring but she’s already made a mighty impact, last year being awarded as AFL South East Queensland Juniors Best First Year Umpire.

“I started umpiring to get fit and be involved in AFL, a game I love, and to also have a part time job at the same time,” said Amy.

As a passionate Brisbane Lions supporter, it’s a dream of a lifetime to be part of the umpiring team of a Lions match under lights at the Gabba.

Amy is also apart of the State Umpiring Academy.

Willem started umpiring in 2019 in the Junior Club Umpiring program and moved into South East Queensland Junior Youth Football in 2020.

When asked why he became an umpire, Willem said he wanted to see a different perspective of the game and be close to the action.

In his third year of umpiring, Patrick has made a name for himself as a reliable and consistent umpire who works hard in his game preparation.

He started umpiring in 2019 in the Junior Club Umpiring program and the Schools of Excellence program, he moved into South East Queensland Junior Youth Football in 2020.

“I took up umpiring to keep fit and be involved in the game. As a passionate Hawthorn supporter, my dream is to umpire a Hawks game!” said Patrick.

AFL Head of Umpiring Dan Richardson said that with the continued growth of Australian Football across both men’s and women’s competitions, the need to recruit more umpires is also growing.

“Umpiring is a fantastic way for everyone to be involved in the game, regardless of their age, gender or cultural background,” Mr Richardson said.

“There are now over 12,000 registered umpires across Australia and we want to ensure that these numbers continue to grow across all levels of the game.

“Community Umpiring Week celebrates the significant role that all umpires play in our game, while highlighting the many benefits of umpiring, including fitness, employment, great life skills and a deeper understanding of Australian Football.”