Hipwood cracks 100 and other Queensland highlights from Round 6 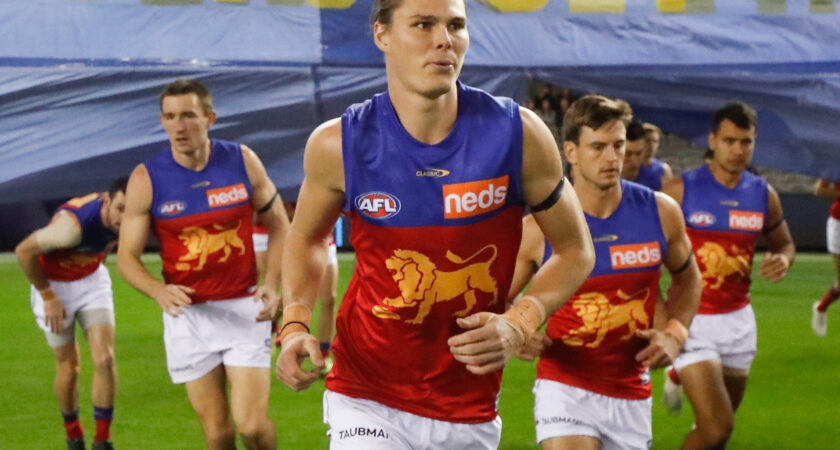 It is a grossly premature to start putting Eric Hipwood into a conversation with the all-time Queensland football greats, but he has certainly posted an impressive 100-game deposit on a five-star career and already made the Sunshine Coast proud.

In a double milestone, Hipwood played his 100th game for the Brisbane Lions last Saturday afternoon and kicked three goals in their three-goal win over Carlton at Marvel Stadium to take his career tally  total to 151.

Among 188 Queensland football products to have played at the elite level the athletic 204cm left-footer, an Academy selection by the Lions with selection #14 in the 2015 National Draft, is the 54th 100-gamer and the first from the Sunshine Coast.

He has edged out fellow Caloundra junior Sam Reid for the honour after giving an eight-year start to the injury-plagued GWS Giants utility player, who was originally drafted by the Western Bulldogs with selection #35 in the 2007 AFL National Draft.

Reid, who began the season one game behind Hipwood at 93, is stranded on 96 after a two-match suspension in Round 2 and a hamstring injury in his comeback in Round 5.

Interestingly, among 125 first-time draftees in the 2007 draft year Reid is one of only 15 still playing.

Stefan Martin was pick #3 in the Pre-Season Draft and Ed Curnow and Shane Mumford got their chance via the Rookie Draft – Curnow at #40 and Mumford #57.

And if Reid is having trouble with the details of his fellow ‘survivors’, Hipwood will be equally hard-pressed to recall his teammates on debut against West Coast at the Gabba less than five years ago.

Hipwood and Reid have been the standouts among six AFL graduates from the Caloundra Panthers, who were formed in 1973 and played their first three years on what is now the site of Caloundra Airport before switching to their current home at North Street.

Other ex-Panthers drafted to the AFL in 2005 without playing at the elite level were Austin Lucy (Essendon) and Chris Smith (Fremantle).

The careers of Reid, a hard-at-it defensive specialist, and Hipwood, a high-flying and exciting forward, could hardly be more different despite their shared origins.

The corresponding numbers for Hipwood, who was born at StKilda in Melbourne, moved with his family to the Sunshine Coast aged three and began his junior career at Kawana Park, are 10-20-22-23-19-6.

And herein lies the statistical comparisons that point to a stellar career ahead.

And Hipwood’s goal tally of 151, 13th on the all-time Queensland list, is better than only four players at the same stage of their career.

The incomparable Dunstall had kicked 419 goals in his first 100 games, while ex-Adelaide and Sydney forward Kurt Tippett had 182, Riewoldt 181 and Charlie Dixon, now at Port Adelaide after starting on the Gold Coast, had 158.

Certainly Hipwood has done more than enough in his first 100 games to bring a rueful grin from StKilda fans who can only dream of what might have been.

Hipwood’s parents Leanne and Brad were huge Saints fans and were married in the old grandstands at the club’s Moorabbin headquarters.

There was a time before they headed north when they might have dreamed of Eric playing in red, black and white, not withstanding draft protocols which were always going to be a roadblock after Hipwood had joined the Lions academy at 13.

And it was only fair. After all, the Saints had already ‘stolen’ a prized Queenslander in Riewoldt, drafting the champion key forward from Southport with pick #1 in the 2000 National Draft after it looked for a time like he could be bound for Brisbane.

In the year prior to Riewoldt’s draft the Lions had first claim on all Queensland players from within 150km of Brisbane, but when it became evident what a rare talent he was Victorian clubs lobbied the League to cut the distance to 75km, thereby sending Riewoldt into the open draft.

Still, Hipwood was a Saints fan in his early days and grew up idolising Riewoldt.

When his Queensland Under 18 side visited StKilda’s then Seaford training headquarters in 2015 it was Hipwood’s job to present Riewoldt with a Queensland jumper.

Speaking to the media after he was drafted later that year, Hipwood recalled the moment. “We got to go down there and talk to the coaches and see all the players. Then I had to get up at the end and give Nick the jumper, which was pretty cool,” he said.

“I was hoping I didn’t stuff up, so I told the story about my parents getting married at Moorabbin and all the players laughed, which was good. I’ve idolised Nick all my life. I didn’t tell him that though.”

The Hipwood family connection also extends to local club Aspley, which was founded by his grandfather Ken. His father had played senior football with the Hornets, where his grandmother was the first female life member, and, almost as if it was part of the script, Eric played his first senior game at Aspley before being drafted by the Lions.

In other Queensland highlights from AFL Round 6 in which both Queensland AFL sides had a win:-

Adelaide’s Elliot Himmelberg played his first game of 2021 and his 20th overall, kicking two goals in his side’s three-point loss to Hawthorn in Launceston. Teammate Ben Keays continued his outstanding start to the season, following his career-best 31 possessions in Round 5 with another 1 against the Hawks.

And in the VFL, Gold Coast ruckman Zac Smith made a welcome return from a knee injury, enjoying 31 hit-outs, a goal and eight possessions in his side’s 14-point win over Sydney. Jarrod Harbrow had 25 possessions after being left out of the Suns side. And Brisbane’s Tom Fullarton had a career-best 34 possessions, 18 hit-outs and a goal in a 69-point loss to Carlton.