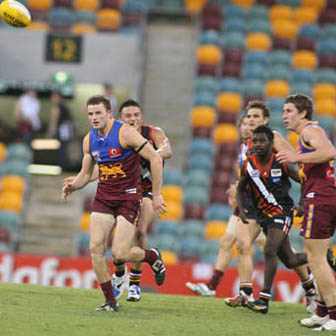 With half of their season played against fellow AFL clubs Sydney Swans, Gold Coast Suns and Greater Western Sydney Giants, the Lions will be able to field a full list.

However, against local former QAFL clubs, the Lions will be restricted to a maximum of 14 listed players on the field during the first half of any home and away or finals match.

They will be allowed a maximum of 19 listed players to appear on the team sheet for any home and away or finals fixture, with the 19th player classified as a ‘Substitute Player’.

The substitute may only be activated to replace (a) any player in the second half of a match or (b) in the event that an injury occurs to a supplementary list player that prevents that player from participating for the remainder of the match.

So a maximum of 15 listed players will be allowed on the field during the second half of any home and away or finals match, but the substitute player must be one of the 15.

The rule has been put in place taking into consideration the Lions often bringing back players from long-term injury and only wanting them to play limited minutes.

To qualify for the NEAFL finals series, a Brisbane Lions Reserves player must have played a minimum of three home and away matches. This same criteria applies to supplementary list players.

As is the case with the Gold Coast Suns, this rule applies to the first two weeks of finals which run during AFL Rounds 23 and 24.

The Suns have been allowed to field unrestricted sides against all opposition, due mostly to the youthful nature of their playing list.