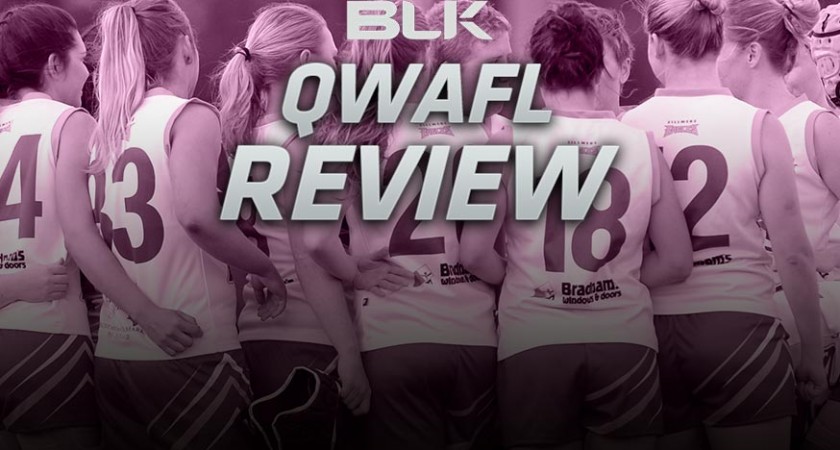 Red hot premiership favourite Coolangatta has stormed into the QWAFL Grand Final, downing the Eagles on the back of a five goal opening term.

The Bluebirds meant business from the get-go, with Nikki Wallace roving Leah Kaslar’s ruck tap perfectly and sending the ball forward within the opening ten seconds. Two goals in the first three minutes to Jordan Membrey and Hannah Sexton, set the tone early.

Zillmere, who took time to find their feet and settle the nerves, came out firing in the second term; but they weren’t able to convert, kicking

The contest felt a lot closer than the half-time score suggested. Zillmere came out ready to fight in the third quarter. The Eagles dominated possession and it paid off with the lead diminishing to four goals at the final break.

But it was the leaders for Coolangatta like Kaslar, Membrey and Wallace who really stood up, helping the Bluebirds book back-to-back QWAFL Grand Final spots.

Nikki Wallace was best-on-ground due to using the ball superbly and making some huge tackles. Ally Anderson and Kylie Lawrence fought hard for the Eagles, trying their best to manufacture an upset.

Check out the live blog recap from the game at aflq-new.fspdev.com!

“Next week we have to be mentally prepared and switched on to face a new quarter as it comes, a new challenge and task.”

“We were good today, we did what we needed to do but there were definitely times where we didn’t take control of the game.”

“The message at three quarter was let’s not shy away from where we were at in the point in the game.”

“We had to see who was willing and who was ready to step up and take control of the game, it was basically a challenge to the playing group.”

“We needed players to lift and take control of the game for the last twenty minutes and make sure that we didn’t let this slip through our fingers.”

“We had a good start, we were physical and we were also good with our decision making with the ball in hand.”

“We have to reset and be mentally prepared as we head into this week.”

“It only takes 5-10 minutes of people to laps and get distracted and it could cost you the game.”

“We were really pleased, especially with our second and third quarters, we dominated the game, against the wind what was a massive aspect of it as well.”

“We spoke to them about being brave, putting their head over the footy first and from there we will control the contest and win the free kicks.”

“The effort today was superb, they were really brave.”

“Obviously disappointed with the result, we are such a young developing team so to be playing in a preliminary final and come so close and be so competitive for majority of our year has been really exciting.”

“At the end of the day we asked for three quarters to lift, improve our performance after than opening term and they did that, we were pretty proud.”

This was easily the best game of the year so far, with some Emily Bates magic and Yeronga experience being the difference in the final two minutes.

It embodied finals footy; high pressure, intense physicality and passion. Torrential rain washed out the first installment on Saturday at Wilston Grange, with the women having to ice up and go home after playing just one quarter.

The two sides rocked up to the new venue, Leyshon Park, Yeronga on Sunday, a bit battered, bruised and sore, but ready to fight it out again. Both sides wanted that grand final spot and it showed, with 11 points being the largest margin separating the two sides throughout the game. It seesawed back and forth every quarter. It was tough, physical contest with pressure being applied to every player possessing the ball.

At half time UQ went in to the rooms with a five point buffer, thanks to a couple of Emma Zielke goals and a late one to Marnie McGorm.

In the final quarter, in the dying minutes, Yeronga co-captain Emily Bates rose to the challenge, collecting a lose hot footy 30 metres out from goal, shrugging off a few opponents and snapping truly to put her side back in front. UQ were slightly more inaccurate in front of goals, but the pressure was extremely high.

The Yeronga forwards were locked out of the game for most of the day due to some strong UQ defensive efforts, but their midfielders in Sam Virgo and Kate McCarthy pushed forward to apply some scoreboard pressure. Zielke was brilliant in front of the sticks, finishing with three and young gun Alanna Perry was superb in a big match.

“Overall it was not our best game, but a few our more experienced players did crucial things at crucial times which was the difference and got us over the line.”

“We’ve got to give credit to UQ, they came with a game plan and really wanted it.”

“It was a bit of a scare our girls needed if we’re going to go in and give the grand final a good shake next week.”

“With five minutes to go, we were really not sure that we were going to get home and we were behind on the scoreboard.”

“It was an enormous sense of relief when the siren went because the game really could have gone either way.”

“Good teams find a way especially under extreme pressure, which we were today.”

“We certainly don’t underestimate the task ahead this weekend, and we will be focusing on freshening the girls up and have them ready to fight next week.”

“After it was called off, a couple of our leaders stood up and acknowledged that it was the scenario we had been dealt and we went home, iced up and came ready to play the next day.”

“The effort was really there, we put four quarters together for the first this year, and the difference came down to experience between the two teams.”

“There was a few what if’s and but’s after the game, there wasn’t much that separated the two teams.”

“The disappointing thing was to lead virtually the whole game and then lose it in the last few minutes.”

“The last couple of weeks we’ve been working on our structures, our leading patterns etc. and it all came together in the game today.”

“We really wanted to show pressure and not give Yeronga a lot of space to work with.”

“We wanted to finish in the top three and today definitely showed that, we almost got the grand final.”

“The way the girls have improved throughout the year is really pleasing.”