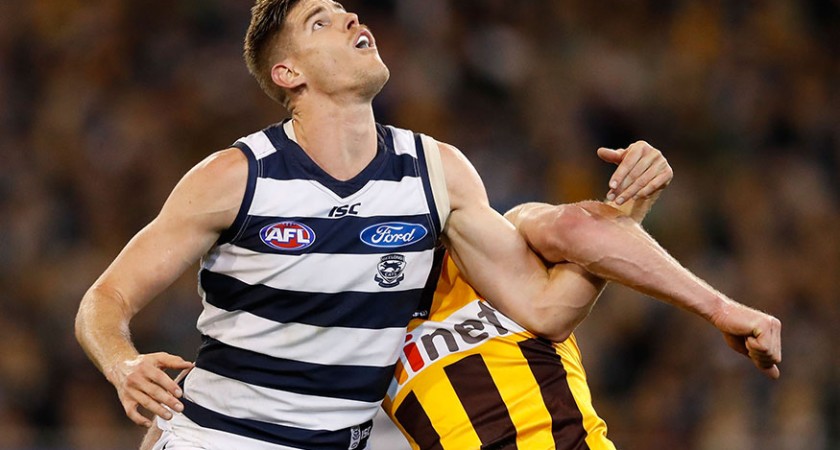 The all-defining and emotional rollercoaster that is football in September took four Queenslanders on a contrasting journey over the first weekend of the Toyota AFL finals.

Hawthorn’s Brendan Whitecross, playing his first final since 2013 and his eighth game of 2016, hit a contract trigger on Friday night that ensures he will play on with the Hawks in 2017, according to the AFL website.

Geelong’s Zac Smith, playing his first final, walked off the MCG in the knowledge that he is one win away from a grand final.

Sydney’s Aliir, also in his first final, was ranked among his side’s best three players in their loss to the GWS Giants at ANZ Stadium Saturday afternoon.

But Sydney’s Kurt Tippett was left with his grand final dream hanging by the threads due to injury.

Whitecross was a standout for the Hawks, collecting 22 possessions, eight marks and six 1%ers as his side lost an epic to their long-time rivals.

He enjoyed a 95.5% disposal efficiency. This was second only to late inclusion Daniel Howe, and Howe had only seven possessions.

Only Jordan Lewis, Sam Mitchell, Luke Hodge, Grant Birchall and Isaac Smith had more possessions, for the defending premiers than Whitecross. Only Birchall, Lewis, Taylor Duryea and Smith had more marks. And only James Frawley, Howe and Josh Gibson had more 1%ers.

As the AFL website noted, Whitecross, in his seventh AFL final, played like a man on a mission, and his cool head and razor-sharp disposal across half back is not to be under-estimated.

He scored an ‘8’ in AFL website player rankings. Only Lewis, arguably best afield with 36 possessions, scored higher. He got a ‘9’.

Birchall, Luke Breust, Shaun Burgoyne, Jack Gunston, Hodge, Mitchell and Cyril Rioli were rated on a par with Whitecross as the Hawks were sentenced to an elimination final against a suddenly rampant Western Bulldogs at the MCG on Friday night.

If Whitecross was at all anxious ahead of selection last week there will be no such angst this week. He’s a lock.

Smith had waited a long time to savor finals football, and he’s not about to forget it in a hurry.

Among 166 Queenslanders to have played AFL football the 85 games Smith played before his first taste of September action is equal fourth on the list behind only the Western Bulldogs’ Mitch Hahn (134), Brisbane’s Marcus Ashcroft (126) and Brisbane’s Matthew Kennedy (110), and level with Brisbane’s Daniel Merrett (85).

The MCG crowd of 87,533 is the biggest crowd of his career. And the occasion likewise.

Smith had eight possessions, a team-high 15 hit-outs, one goal assist and seven 1%ers – second only for the Cats to Harry Taylor.

He scored a ‘5’ in the AFL player website ratings as they noted he gave a good contest in the ruck and around the ground.

As the AFL website noted, it wasn’t the three-goal blitz of his first game for Geelong in Round 1, which coincidentally was also against Hawthorn, but it was serviceable.

Aliir’s finals debut in just his 11th AFL game put him at the opposite end of the scale to Smith, with only six Queenslanders having reached the finals stage more quickly.

Adelaide’s Aaron Keating, brother of Brisbane triple premiership hero Clark Keating, played a final in just his second game. Sydney ruckman Tony Smith did so in his fourth game and Hawthorn’s Brent Renouf in his sixth.

One of the great success stories of AFL 2016, Aliir was positively brilliant in front of a career-high crowd of 60,222, collecting 16 possessions for the Swans against the Giants, and going at 87.5% disposal efficiency.

The AFL website scored him a ‘8’. No Swans player scored higher, and only Dan Hanneberry and Heath Grundy were rated at the same level.

As the AFL website noted, his dash from defence was impressive, he stood up in the first quarter, and was prominent at a time when the Swans were under fire.

In a closer game his effort to catch Devon Smith as the Giants goalsneak prepared himself for a shot at goal might have been crucial.

Conversely, Tippett never had a chance to really get into the game, and now faces the prospect of not playing again this season.

Already the giant ruck/forward has been ruled out of the Swan’ semi-final against the Adelaide Crows at the SCG on Saturday night with a fractured jaw.

And although the club medical staff is yet to rule on his likely availability beyond that history says it would be grand final weekend before he could possibly be fit.

Tippett, in his 14th AFL final, was left with a non-displaced hairline fracture following a first quarter clash with GWS pair Shane Mumford and Callan Ward.

Having passed the obligatory concussion test he bravely returned to the final in the second quarter only to be slammed into the ground by Mumford in a crunching tackle that again left him heavily dazed.

He was restricted to 69% game time overall in a setback to the rotation plans of coach John Longmire and finished with eight possessions, 14 hit-outs and two clearances.

In the VFL, Sam Michael was a member of the Essendon side beaten by Footscray in the semi-finals. He had six possessions, eight hit-outs and a goal.

And in the SANFL, Paul Hunter was squeezed out of the Adelaide Crows that beat South Adelaide in the semi-finals.