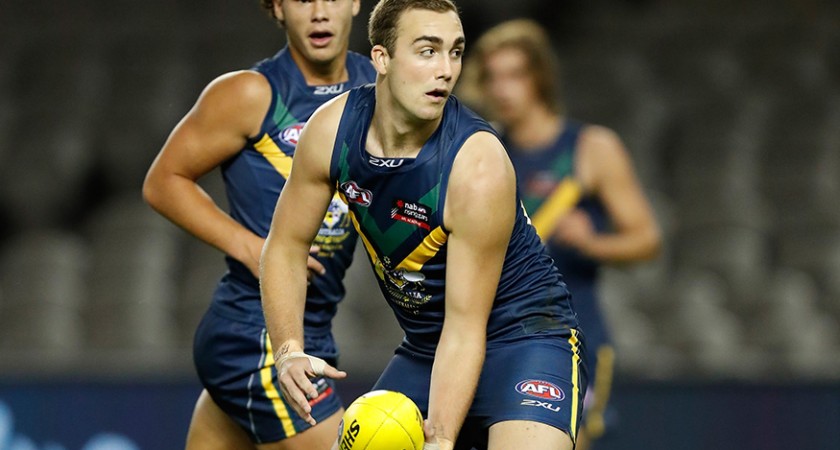 Exciting Queensland draft prospects Brayden Crossley and Connor Ballenden put on a show at Leederville Oval on Sunday, despite the Allies going down in the contest 6.8 (44) 12.12 (84), in round three of the NAB AFL U18 National Championships.

After being rested for round two of the championships, Brayden Crossley returned to the lineup and continued his impressive form with an eye-catching display. The ruckman was dominant in the ruck, picking up 29 hitouts, but also impacted around the ground with 15 disposals, five tackles and two goals.

Crossley is considered undersized for a ruckman at 198cm, but makes up for it with his appetite for the contest at ground level. The Gold Coast SUNS Academy talent now has four goals in two games.

After playing most of his football this year as a forward or in the ruck, in a new role, the 199cm Connor Ballenden played in defense. The Lions Academy star flourished down back, picking up 20 disposals for the game and reeling in eight marks.

The question as to where Ballenden plays his best football takes on more complexity now, considering the promising talent has shown signs as a forward, as a ruckman, and now as a defender.

Also from the Gold Coast SUNS Academy, Connor Nutting had some important touches, after being named as a late inclusion for the Allies. Nutting finished with 11 disposals.

The Allies will be aiming for their first win of the series, when they meet Vic Metro at Simonds Stadium on July 5th for their final game.

The Allies squad, currently taking on the rest of Australia at the NAB AFL U18 National Championships, is made up of the best players from the Academy Series, which replaced the division two carnival for the first time this year.