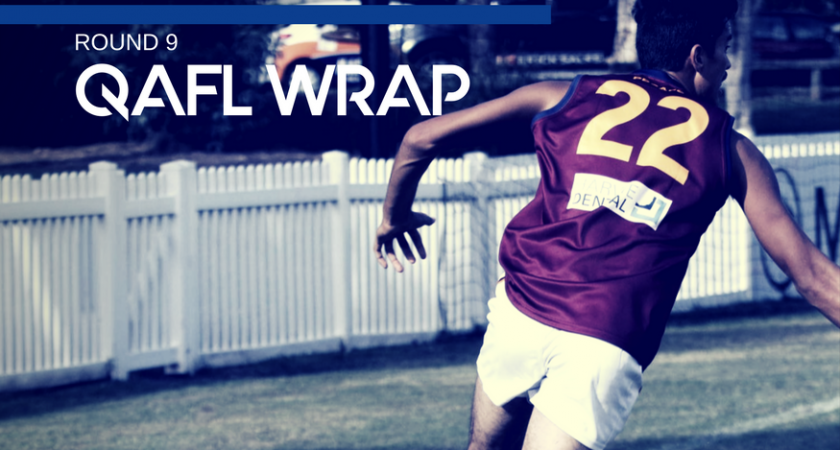 It was always going to be a challenge for Wilston Grange, coming up against a contested footy side like the Western Magpies, who are great at winning the ball and can be damaging on the outside when they get it. They also needed to face the challenge without two of their best, in Steve Brittain and Brent Moloney, two big bodies that can bowl the opposition out of the way and generate possessions.

Contested footy also happens to be a big strength of Wilston Grange’s, so this clash was set up as a cracker, with two teams that love to scrap on the inside and that’s the way it played out.

Coach Nathan Clarke’s young Gorillas all stepped up, to help out the likes of midfield workhorse Mark Desousa and wily forward Matt Trewhella, netting Wilston Grange an important win in a close one, 95 to 86.

Jason Burge played another, in a string of standout games for the Lions, against Broadbeach on Saturday. The agile little midfielder is as tough as they come and doesn’t mind putting his head in dangerous places, but it’s his ability on the outside, when he gets time and space that’s most impressive.

Time and time again, Burge collected the footy in a tight situation, weaved his way out of congestion and found a target with that trademark, bullet-like pass.

“He obviously gets tagged every week, but he just finds a way to compete, so if he’s not getting touches he still finds a way to stay in the game. That’s what good players should do,” said Lions coach Chad Owens after the game.

If Burge keeps tracking in his current direction, he could be in contention for some silverware at the end of the season.

Broadbeach have to be commended for the way they refused to lay down against the Lions. There were moments when Palm Beach threatened to bust the game open, but through a combination of the Lions inaccuracy and Broadbeach’s sheer determination, the Cats managed to hang in there and threatened at times in the last quarter. Palm Beach was too good in the end though, closing out the contest 13.14.92 to 10.11.71.

New Labrador recruit Barry Hall topped the goal scorers in round nine, bagging eight as the Tigers midfield provided the ‘Hall’ of famer with lace out service. Tigers second tall forward Bryce Retzlaff enjoyed his time out of the spotlight, contributing five goals. Young gun Ryan Dadds from Morningside, slotted a handy three goals up the other end.

The Mountain, big Mitch Brewer, had one of those games against Palm Beach where at all stages throughout the contest he looked like he was a few contests away from breaking the game open, but just couldn’t get there. Brewer was strong in the contest, taking some great double grabs, but missed some easy goals that he would normally gobble up. The big Cat still ended up with three, while also spending time up the ground in the ruck.

It was an old fashioned gunslinger shoot out at Bendigo Bank Oval on Saturday, between the Magpies and the Gorillas, with Jakob De Winter at one end and Matt Trewhella at the other. Both forwards lit up the scoreboard, Trewhella kicking seven for the Gorillas and De Winter bagging six for his Magpies. It ended up being a tight one and with some straighter shooting from the Magpies it might have been even closer.

The Vultures shared the load around in the forward line against Surfers, Jesse Green and Jake Warren kicking three apiece, while their main spearhead Sam Stubbs continued his stellar season also slotting three important goals. Demon Danny Green, just finds a way to score and he did so again over the weekend, despite being in the loosing side and ended up with three goals.

After a big Tigers win a lot of the focus is deservedly on big forwards Bryce Retzlaff and Barry Hall; also through the middle of the ground, engine room cogs Jackson Powell and Adam Clarke.

Just as impressive, however, on the Morning ‘side’, were tall running defender Matthew Serrurier and emerging young talent Ryan Dadds.

Courage comes in many forms, but running back with the flight to put a spoil on, as one of the scariest units the AFL has ever seen is undoubtedly moving like a steam train in your direction, has to be one of the more obvious ones. Not only did Serrurier commit to the contest, he also wore a heavy knock from Hall and played out the rest of the game brilliantly. He intercepted the ball in the air, took the game on and was accurate with his kicking.

Nineteen-year-old Ryan Dadds is a Morningside product, but aligned to Brisbane’s NEAFL side as a member of the Brisbane Lions Academy, so he’s played some NEAFL footy for Brisbane at stages this season.

The young gun showed plenty of speed and finesse with the footy when he had it, getting up and down the ground well and hitting the scoreboard.

There is something impressive about the way Dadds hits the pack at speed and scoops the ball off the deck so easily. If the promising youngster ends up playing more footy with the Panthers’ senior side, it could really contribute to their improvement in the back half of their season.