Queensland raring for nation-first Pride Round 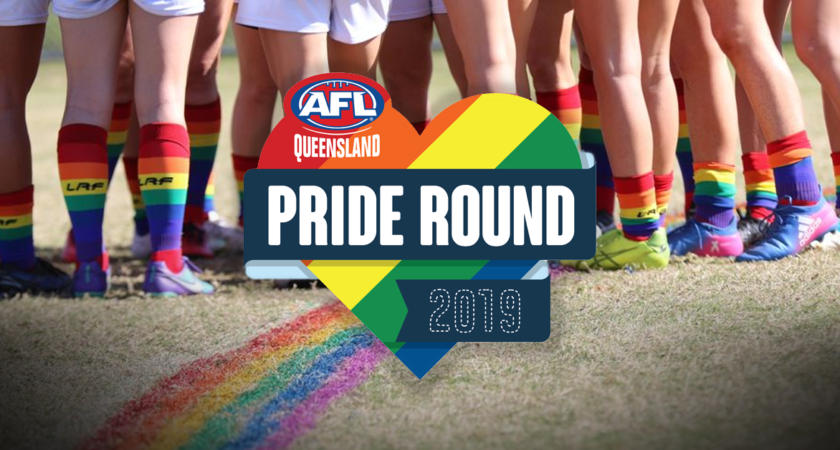 AFL Queensland will make history on July 27 with the first ever Pride Round, to be played across the state.

Pride Round, which follows on from Queensland’s inaugural AFL Pride Cup held last year between the Robina Roos and Surfers Paradise Demons women’s teams, will be Australia’s first ever dedicated multi-league LGBTIQ+ carnival. The Bond University QAFLW will headline Pride Round, with all eight competition clubs playing out of the one venue, Moreton Bay Central Sports Complex, on the same day.

The round forms part of AFL Queensland’s Community Month and aims to combat homophobia by establishing an inclusive environment for the LGBTIQ+ community within the sporting landscape.

Across the state players will sport rainbow socks, with a number of clubs also donning custom pride-themed gurnseys. In addition, umpires will wave rainbow coloured flags and the goal lines at every venue will bear a splash of pride thanks to ABS Signs donating rainbow goal covers. The 50m arcs will also be transformed into rainbows, thanks to Signet Paint, in support of Pride Round.

“AFL Queensland are pleased to take a leadership position on LGBTIQ+ issues, as we strive to meet our vision of being the most progressive and accessible team sport in Queensland,” Main told aflq.com.au.

“We believe sport plays an important role in promoting inclusion and bringing people from diverse backgrounds and experiences together.”

Wilston Grange, one of the clubs partaking in the QAFLW Pride Round, have a strong presence within the LGBTIQ+ community and hope to use the weekend to emphasise the positive messaging surrounding the games.

Wilston Grange Women’s Football Manager Laura Kidd said the club can’t wait to take part in Pride Round given the personal connection it bares with many club members.

“At Wilston Grange we place great emphasis on acceptance and inclusivity. Pride Round for our club is something we have been trying to start for a number of years,” Ms Kidd said.

“This is a very personal round for a lot of our club members as we have a number of men and women who identify as LGBTIQ+, as well as an endless number of supporters who support the community.”

Kidd also emphasised the need for the club to not only be a place where on-field success is achieved, but also kicked goals at a more societal level.

“We congratulate AFL Queensland for recognising such an important round and we cannot wait to run out in our pride round jerseys.”

Clubs in the NEAFL and QFAW competitions will be joining in the Pride Round activities across various cluster venues, with more clubs across the state expected to join the list of matches celebrating on July 27.

The NEAFL will also be supporting Pride Round at Voxson Oval when Aspley Hornets host Sydney University, in what is shaping up to be a top 6 clash.

Pride Cup Australia is working closely with AFL Queensland for Pride Round and will have a presence on the day at Moreton Bay, with other organisations such as Queensland AIDS Council and Open Doors also involved.

Pride Cup works to unite all players in footy and will be holding an education session in the lead up to the round for players and AFL Queensland staff.

For those unable to make it to watch games live, the QAFLW and NEAFL games will be live streamed.

For more details on AFL Queensland’s Pride Round, including live streaming, check out the Facebook event here.