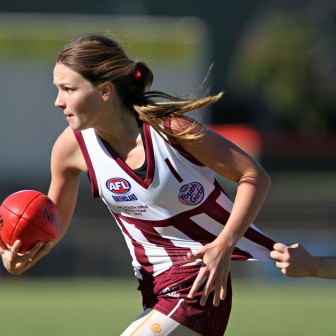 The Queensland women’s side has been announced today.

The 2013 Qld Women’s Team (getwinesdirect Sunfire) has today been named after a successful Women’s State Championships on the weekend.

Under 18 Youth Girls two-time All-Australian player Emily Bates (pictured) will be making her senior debut (as well as playing in 2013 U18 Youth Girls Nationals next weekend in Shepparton) along with 2012 Under 18 All-Australian defender Ally Anderson and teammate Marnie McGorm.    Stalwart Jo Butland will be making her 6th Nationals appearance along with other longtime Cairns teammates Lauretta Dowling and Ashleigh Singleton.

Leah Kaslar is returning after a hiatus in Western Australian for the 2011 Nationals as is former Matilda player & 2009 All-Australian player Natalie Thomas after recovering from a serious ankle injury.

Townsville players Rebekka Baggendorf and Breanna Koenen have also been picked in the getwinesdirect Sunfire side after showing some great commitment, travelling to Cairns over the summer to play in their Women’s League competition.

The Women’s National Championships will be held from 18 to 22 June 2013 in Cairns with the getwinesdirect Sunfire team playing in Division 1 against current national ahampions Victoria, as well as Western Australia and New South Wales.