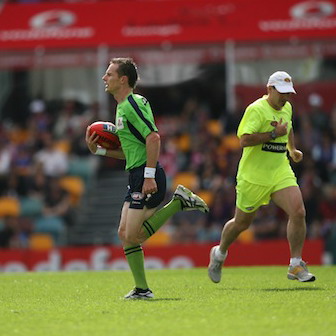 Queensland Boundary Umpire Aaron Deckys has been appointed to the NAB Cup Grand Final at AAMI stadium this Saturday night.

The Sunshine Coast  resident said that he was more excited than nervous at the prospect of being centre stage in front of an expected 25,000 Adelaide Crows  and West Coast Eagles fans.

“It’s such an exciting event to be part of and I’m really looking forward to representing Queensland.”

It’s been a big couple of weeks for Deckys, who last Saturday ran boundary in the Brisbane Lions V Carlton NAB Cup Match in his home town of Maroochydore.

“Having big names like Brown and Judd running around my local ground was quite a surreal experience,” Deckys said.

“I’ve done a lot of work in junior umpire development in the area and it was great for the younger umpires to see the opportunities that umpiring can provide.

“It also wasn’t bad from a travel perspective,” he quipped.

The AFL NAB Cup Grand Final will be shown on Fox Footy and 7 mate. CLICK HERE for broadcast details.