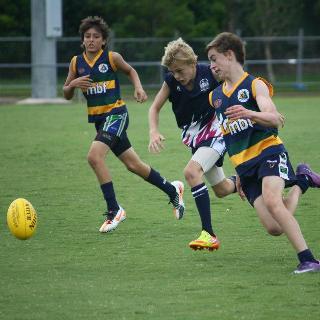 Round one of the Schools of AFL Excellence Cup kicked off in windy conditions at Maroochydore yesterday.

The official season of AFL Queensland’s Schools of AFL Excellence Cup kicked off yesterday with the first fixture at Maroochydore.

The Junior teams were first to hit the field in what proved to be a tough, physical first quarter for both sides in the fine, but windy, conditions.

The second half was one-sided, with the Vipers arching their backs and kicking away to take out the match 9.8.62 to 0.1.1.

Viper’s forward Tyler DeZotti finished up with three goals to his name, with Jordan Collicoat booting two and five other individual goal kickers.

In a disappointing match for the Creekers, Coach Peter Bock said the boys will learn from the experience and continue to improve as the season continues.

“Obviously this was a tough match for our boys,” said Bock.

“It really exposed our weaknesses and demonstrated how as a team, we need to improve our fitness and cohesion,”

The seniors then took the ground with Mountain Creek having a noticeable height advantage over their Narangba Valley counterparts.

The Creekers kicked away in the first quarter, booting four unanswered goals and keeping the Vipers scoreless.

The Vipers bit back in the second quarter with a couple of goals leading into half time.

Mountain Creek were dominant in the second half with eight goals, the team boasting nine individual goal scorers by the final siren, running out winners 16.11.107 to 4.3.27.

Among the goal kickers for the Creekers were Cameron Stevenson with four, Lewis Bold with three and doubles to both Daniel Henderson and Dylan Menti.

In an impressive display of school footy, Coach Justin Pritchett said the boys were awesome around the ball and put in a superb team performance.

“We have a good side here and the boys played some really good footy which is great to watch and even better to coach,” Pritchett said.

Sunshine Coast Development Officer, Dayne Frew said the day was a great success with some exceptional AFL skills on show.

“It is great to see these School’s of AFL Excellence really stepping up and playing some great footy,” said Frew.

“It’s good for the code and a great way for schools to engage their athletes in a strong competition.

“School Footy is all about development and getting the students involved, even if AFL is not their first sport.

“With opportunities within the School Footy calendar and through the School of AFL Excellence program we are seeing some real talent coming through the ranks and discovering what a great sport AFL is to be involved in.”

The remainder of Round One sees fellow newcomers, Benowa State High, take on Sandgate District State High at Surfers Paradise AFC on Tuesday 20th March. The junior boys will commence at 11:00am.

The following week Helensvale State High will host Park Ridge State High at their own school grounds for the first time, with newly erected posts having just gone in.

In addition to the junior and senior boys’ matches, the best senior girls from each school will also play in a curtain-raiser to the boys’ matches. Games commence at 10:00am on Tuesday 27th March.

For more information on the Schools of AFL Excellence program including participating schools, stories and the draw, visit the SCHOOL FOOTBALL section of the AFL Queensland website.

The Sunshine Coast Juniors’ Facebook page has a collection of images from yesterday’s Schools of Excellence clash at Maroochydore. Click here to see them.