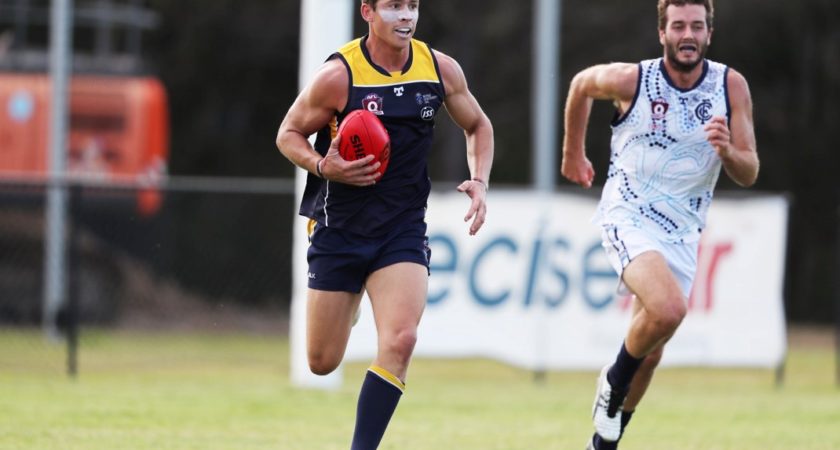 THE Park Ridge Pirates have the scent of a maiden grand final appearance in their nostrils and can guarantee themselves that in the QFA Division 2 Qualifying Final today.

The Pirates are up against a youthful Beenleigh Buffaloes at the Park Ridge High School, in what is the club’s first home finals appearance.

Victory puts the winners straight into the premiership decider in a fortnight while the losers must go through a preliminary final to qualify for a crack at the premiership title.

Adams, a legend at Sandgate where he was part of the furniture until he transferred across town to the Pirates, watched the Buffaloes beat Bond University by 18 points last weekend and went away impressed by the depth of youthful talent in the Buffaloes ranks.

“They have a lot of young fellers who are quick and who can run,” Adams noted.

“I watched them last week and they were pretty good, they’re going to be a good footy side.”

There is always a but to be added to any assessment, and this one, Adams believes, could be the youth factor on the Park Ridge High oval.

“It is tight and congested on our small ground,” Adams said, hinting that some of the Beenleigh rookies are going to be out under the pressure cooker in finals football.

Beenleigh are coached by Cameron James, who has three sons – Josh and 17-year-old twins Jack and Lachlan – in the side.

Last week against Bond, the Buffaloes trailed at three-quarter time but their abundance of young legs carried them to victory.

COOLANGATTA, once one of the most feared clubs in the old Gold Coast competition, are on the cusp of a resurgence after too many years in the wilderness.

The Blues hope to take another step forward when they clash with Coast rivals Bond University in the QFA Division 2 knockout First Semi-Final at Bond University on Saturday.

After beating Coomera last weekend for their first finals win since 2004, the Blues go into the match as one of the form teams of the competition against a side that has struggled of late with only one win from their past five appearances.

Under playing coach Matt Walder, Coolangatta have lost twice this season against Bond but according to club president Brent Kelly things are much more buoyant in the Corpsure Oval camp this time around.

“They beat us convincingly in the first round, which was probably our worst performance of the year and when we had a lot of new blokes coming together,” Kelly said.

“The second time they got us, we had a lot of injuries when we went in without probably five of our best.

“But we got a lot confidence out of that and we’re quietly confident we can turn the tables.”

Coolangatta was a Coast powerhouse until the mid-2000s. It was in 1981 and 1982 that they beat Southport in successive grand finals when those clubs were at war.

It is worth noting that the Blues farewelled Southport, who joined the QAFL in 1983, as the second-best Gold Coast club.

Last week, when they eliminated Coomera in a final, the Blues had not won a finals match since 2004 when they beat Northshore at Lowe Oval in the first semi-final of the AFLSQ Premier Division.

Also last week, Bond University were soundly beaten by Beenleigh although football manager Sam Schiphorst expects the Bullsharks to have two of their better performers back in action.

Bond remains the only team to have beaten minor premiers Park Ridge this season.