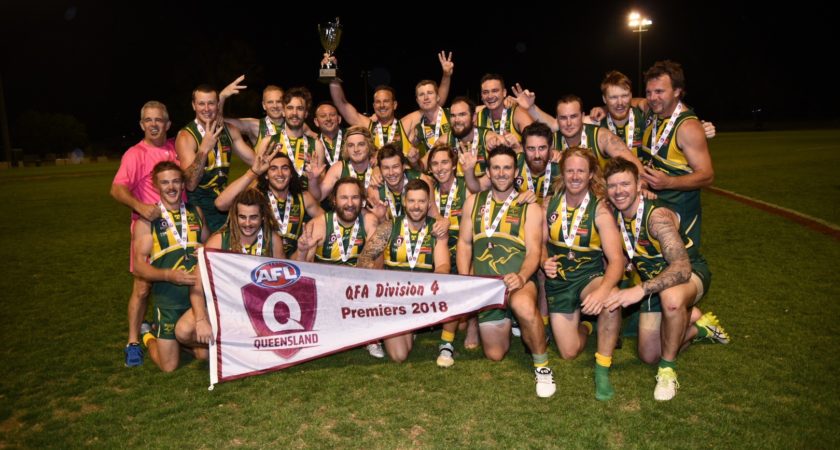 A dominant Maroochydore side have overcome the odds in the Grand Final to claim the QFA Division 4 premiership over the Western Magpies by a staggering 41-points in just their first year in the competition.

The Roos produced a remarkable underdog victory against the Magpies, who had beaten the Sunshine Coast team on all three occasions this season, to win 7.17 (59) to 2.6 (18) at Giffin Park Oval on Friday night.

The premiership triumph over the Magpies heralds a dynasty for this Maroochydore side, who have now won three consecutive premierships stemming back to wins in the Sunshine Coast and Wide Bay competitions in 2016 and 2017.

Despite their short tenure in division four, the Roos wasted no time acquainting themselves in their new surroundings this season and that showed on Friday night against the Western Magpies.

Maroochydore appeared the better side from the opening bounce and their dominance around the ground was easily reflected on the scoreboard in their landmark win.

“It’s absolutely fantastic. We put in a lot of hard work this year,” Maroochydore head coach Leigh Roberts told aflq.com.au after the game.

“We pretty much had a new side this season and in a new competition as well, so for us, it’s been fantastic. I couldn’t be prouder.”

Maroochydore emerged early as the side most likely to hit the scoreboard as the Roos conjured up the first inside 50s of the game.

But the side could only muster three solitary behinds in the early stages and another shot that was intercepted on the line by the Magpies.

After over 15 minutes without a goal, a stoppage inside the Roos’ arc allowed Greg Faure to find space and snap truly for the game’s first major.

The eight-point deficit could have been decimated early in the second by Magpie Benny Ness, but his behind soon allowed the Roos to go coast to coast and find the goals through Zeke Holt to extend the lead.

But much like the opening stanza, the second term was a genuine arm wrestle; Holt’s major the only goal of the term.

If it wasn’t evident already, and despite their inaccuracy on the scoreboard, Maroochydore appeared the side more willing to spread from the contest as the Roos continued to will themselves on top through the midfield.

A goalless first half was ousted immediately in the third quarter as Jason Evans fired home an early goal – the first time all game the home side had looked genuinely dangerous in front of the sticks.

Repeat inside 50s for the Roos allowed them to pounce, and they did it through Mitch Bird, who bobbed up with a goal of the year contender with a boundary line miracle.

The floodgates opened midway through the premiership quarter as Maroochydore nailed home a trio of majors to extend the lead to 37-points.

A 50m penalty gifted Greg Faure his second major of the game before Dillon Walker and Shannon Beavis booted goals to all but assure the premiership cup would be heading up the Bruce Highway to Maroochydore.

Faure kicked off the final term with his third goal of the match which sent the Maroochydore faithful into euphoria.

Despite the Magpies finishing atop the competition standings and beating the Roos on all three occasions this season, Maroochydore were the firm favourites in the clash according to coach Roberts, and that confidence carried over onto the field.

“It’s amazing. We knew we were the best side in this competition and we just needed to put that together and we did that tonight,” he said.

“We needed to make sure we were tougher on the ground. For us, it was just about making sure we tightened up around the stoppages and got first use of the footy. I think that showed tonight.”

The Roos were led by Mitchell Bird, who won the best on ground medal in the win.