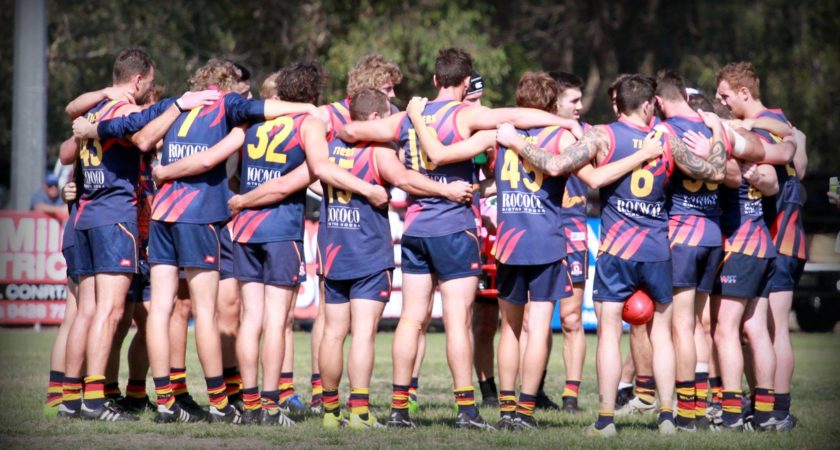 Coorparoo were forced to come from behind to withstand an improved Mayne outfit by just two points at Giffin Park Oval on Saturday afternoon.

The Kings were forced to dig deep after a finding themselves four goals down at the main break, but prevailed in a dominant second half to win 11.10 (76) to 11.8 (74).

The win keeps Coorparoo’s premiership hopes alive as the only Brisbane based club left standing in the HART Sport Cup.

Despite being the clear underdog ahead of the contest, especially after losing their final two games of the home and away season, Mayne stormed out of the blocks with gusto to pile on four goals to two in the opening quarter.

The Tigers’ barnstorming first stanza shocked the home side Kings, who had prevailed over them in their most recent encounter and held an eight-point differential on the ladder.

Mayne’s dominance on the scoreboard continued in the second term as the northside club again piled on four goals including Nicholas Holleran’s second of the game.

The result titled heavily in favour of the Tigers as the two sides parted for the main break, before Coorparoo mounted a supreme comeback in the second half.

The Kings booted seven goals to three after half time, including a string of six in a row, retaking the lead thirteen minutes into the final quarter.

Coorparoo’s sudden burst left the Tigers, who had long loomed as winners for much of the first half, stunned as the possibility of an early finals exit dawned on them.

The margin teetered still within a goal as Corey Massingham converted his opportunity with ten minutes remaining and still the Tigers had their chances to edge themselves back into the lead.

Three Tigers players had opportunities to win the game, but the chances were misses and resulted in two behinds and a no score.

One of those players who had a chance in the final ten minutes, albeit the longest of odds to score a goal, was first year Tiger Jake Warren, whose desperate snap in tight circumstances failed to hit the scoreboard.

With the win, Coorparoo will face Caloundra this Saturday at Carter Park, Caloundra.

Noosa boosted their chances of a return to the QFA Division 1 HART Sport Cup Grand Final after a dominant third term became the catalyst for a strong win over Sunshine Coast rivals Caloundra at the Tigers’ Rococo Bistro Oval on Saturday afternoon.

The 14.13 (97) to 8.8 (56) win gifts the Tigers an easier route to the finals as the club will face minor premiers Maroochydore for a spot in the Grand Final this weekend while Caloundra are now forced to take the long route to the big dance after losing.

Speaking ahead of the contest, Panthers head coach Steve Moody admitted he would prefer to “make sure we go through the easy route and not have to use the double chance,” but the loss has relegated the Panthers’ to the difficult path throughout the finals.

Caloundra found themselves on the back foot early in the contest after Noosa stormed out of the blocks to produce an impressive eight scoring opportunities in the opening term.

Fortunately for the Panthers, the home side Tigers managed an inaccurate 2.6 for the term and despite their plethora of inside 50 and scoring positions, held just a six-point lead at the first break.

After finally finding their footing in the contest after a sluggish opening term, Caloundra broke even in the second as Noosa won out in the quarter by just one point.

Panthers’ youngster, Joshua Keleher, became the difference between the two sides for the term, booting two goals to keep the away side in the hunt.

Keleher’s performance, especially throughout the second term was just another chapter in what is fast becoming a stellar debut season with the Panthers after crossing over from Rivals Maroochydore in the summer.

But Noosa’s nine-point half time lead was increased almost immediately in the premiership term as the Tigers burst out of the blocks after the break in a game-winning third term.

The Tigers booted eight goals to three in the term to set up the win, led by Liam Kenny who kicked three of his four goals in the third.

Much like the second term, both sides broke even in the final term, but Noosa’s third quarter blitz had already established the Tigers as clear winners in the contest.

Noosa will now play Maroochydore this weekend for a spot in the Grand Final while Caloundra will face Coorparoo to keep their season alive.