Around the Reigons: Finals Recap Week 3 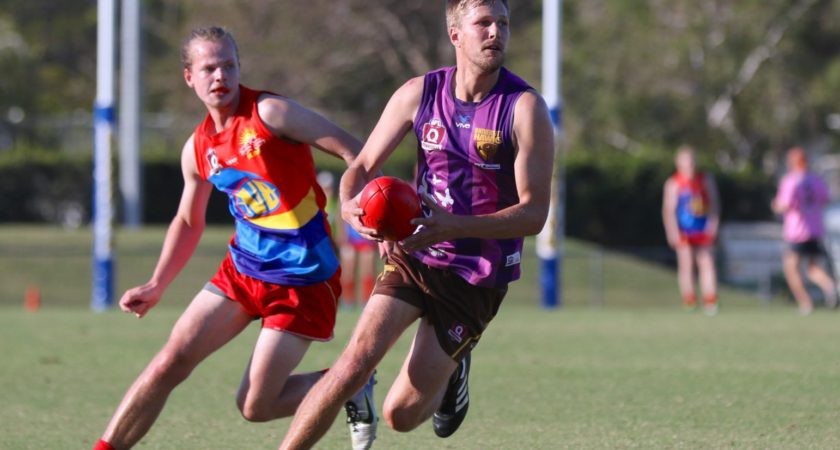 The Hervey Bay Bombers have secured the final spot in next weekend’s Grand Final after producing a convincing victory over Bay Power on Saturday afternoon.

The Bombers headed into the contest with the upper hand, having comfortably defeated Power in their last two encounters by 56 and 27 points respectively.

However, Bay Power were the winners of the two teams’ first clash in round 5, standing as proof that knocking the Bombers off their pedestal was not an impossible task.

The Bombers made their presence known from the opening bounce, kicking four goals three in the opening term and heading into the first break with an eight point lead.

Hervey Bay remained cool and composed throughout the second term, booting another 3 majors to slightly extend their lead to 14 points at half-time.

The Bombers elevated their performance to new heights in the third term, tallying up 33 points while restricting Bay Power to just three behinds for the term.

Bay Power headed into the final term trailing by 44 points, meaning victory was dangerously close to being out of sight, and a miracle was required for the win.

But the Bombers refused to budge, maintaining their comfortable lead and smoothly sailing to a 58-point win as the final siren sounded.

The victory was truly a testament to Hervey Bay’s exceptional teamwork, with 11 members of the side making their way onto the goal scorers list.

Hervey Bay’s victory sends them through to the Big Dance against the Gympie Cats on the September 1 which, based on the two side’s extremely tight encounters all season, will be an unpredictable and nail-biting contest.

The first spot in the Grand Final has been claimed by the Hermit Park Tigers after they cruised to a smooth victory over the Thuringowa Bulldogs in Saturday’s first round of finals.

The Bulldogs headed into the clash inflicted with a recent spur of bad luck, having recorded consecutive losses in their last four matches.

However, the Bulldogs had already proved this season that conquering the Tigers was not out of the question, having narrowly defeated the minor premiers back in early May.

The bulldogs retaliated shortly after, locking the ball in their forward line for much of the remainder of the quarter and heading into the first break with a 5-point lead.

The second quarter was a similarly tight but low-scoring affair, with the Tigers clocking up a modest 14 points to claw their way in front by three points at the main break.

Hermit Park came out with all gun’s blazing for the second half, booting five consecutive goals before the Bulldogs had a chance to respond.

The Tiger’s exceptional third-quarter performance allowed them to extend their lead to three  goals heading into the final term, setting a challenging but achievable target for the closely-trailing Bulldogs to exceed.

But Hermit Park’s Josh Andrews drilled his way through the Bulldog’s defence, booting three majors in the final quarter to lead his side to a 29-point victory and earn himself the top spot on the Best on Ground votes.

The Tiger’s victory propels the side straight through to the Grand Final in a fortnight’s time, where they will have the chance to take home back-to-back premierships.

To keep their premiership hopes alive, the Bulldogs will need to break their losing streak next week when they battle the University Hawks in a knock-out preliminary final.

The Northern Beaches Suns’ finals crusade has come to an abrupt end after going down to the University Hawks by 41 points on Sunday afternoon.

The Hawks headed into the game six games clear of the Suns and emerged victors in all four of their encounters with the Northern Beaches side this season.

However, the Suns only narrowly lost the last two encounters by less than 2 goals, proving they are certainly not a side to be underestimated.

The Suns’ Benjamin Holden set the tone for the game from the very start, booting the match’s opening goal within the first two minutes and slotting another two throughout the first quarter.

Holden’s dominance in the forward line supported Northern Beaches to an 18-point lead over the Hawks heading into the first break.

The two sides were caught in a headlock for the second term, with the Hawk’s Hayden Pownall scoring the only major for the term and reducing the game’s margin to just 10 points.

University Hawks finally switched on for the third quarter, clocking up 4 goals and 3 behinds while restricting the Suns to just 1 goal.

The Hawk’s third-term dominance propelled them into the lead for the first time all game, edging a narrow 11 points in front at the final break.

University compensated for their slow start with a stellar final-quarter performance, clocking up a whopping 13 scoring shots throughout the term and taking home a convincing 41-point victory.

The Hawks’ victory progresses them through to a knock-out preliminary final next week against the Thuringowa Bulldogs who they have lost to twice and defeated twice this season, promising an unpredictable and exciting contest.

A comfortable victory over the Boyne Island Tannum Sands (BITS) Saints has thrust the Glenmore Bulls through into the Grand Final against the Yeppoon Swans next week.

The Bulls headed into the clash as victors of the two sides’ most recent contest in round 14, but the Saints proved earlier in the season that they are certainly capable of triumph, having emerged convincing winners against Glenmore in their mid-June encounter.

The Bulls were rearing to go from the second the siren sounded, locking the footy in their scoring end for the majority of the first term and conceding just one goal to the Saints.

Despite their dominance, the Bulls were plagued with inaccuracy in front of goal, kicking three goals five to head into the quarter-time break with a modest 17-point lead.

The Saints managed to make more of an impact on the scoreboard in the second term, but they were still unable to halt the Bull’s stampede, tallying up 19 points while conceding another 29 points to Glenmore.

The third quarter was a stubborn affair that barely changed the scoreboard, with Glenmore clocking up another eight points and BITS adding on just three.

The Bulls headed into the final term boasting a 32-point lead, setting a tough but not impossible target for the Saints to surpass.

But it was not to be for the Saints- Glenmore maintained their composure to produce an admirable four-quarter effort, finishing 41-points in front at the final siren.

Glenmore’s Ashley Brown and Darcy Payne were pivotal to their side’s victory, scoring over half of the team’s points between them and both being named in Glenmore’s Best on Ground votes.

The Bulls face a tremendous challenge next Saturday, where they will take on undefeated minor premiers the Yeppoon Swans for the premiership flag.

The Swans have taken home resounding wins in all four of their encounters with Glenmore this season, meaning the Bulls will need to produce an upset of gargantuan magnitudes to take home the trophy.

The two sides fought tooth-and-nail all season, concluding the regular rounds on the same points with the Bombers taking third place on percentage alone.

Of their two encounters this season, the Redbacks and Bombers won one game apiece and both matches had almost identical margins, laying the foundations for an unpredictable final contest.

Both sides kicked into full swing from the opening bounce, clocking six scoring shots apiece in the first term.

However, the Redbacks capitalised on their opportunities more effectively than the Bombers, booting 6 goals 0 behinds to the Redback’s 3 goals 3 behinds and earning them a 15-point lead heading into quarter time.

South Toowoomba dominated the second term but were still unable to lift their curse of bad luck in front of goal, booting 3 goals and 6 behinds and leaving Warwick just 4 points in front at the main break.

The Bombers finally broke their spell of shooting inaccuracy in the third term, slotting 5 goals throughout the quarter and edging them in front of Warwick for the first time all match.

The stage was set for a nail-biting finish, with South Toowoomba leading by just a solitary goal heading into the final term.

The neck-and-neck contest persisted until the very last minute but the Redbacks proved themselves hungrier for the win, clawing their way back in front and finishing 14 points in front as the final siren sounded.

The Bomber’s defeat eliminates them from the premiership pursuit, while Warwick will progress through to a knock-out preliminary final against the Goondiwindi Hawks next Saturday.

Minor premiers the University of Southern Queensland (USQ) Cougars have clipped the Goondiwindi Hawk’s wings with a comfortable 38-point victory and secured the first spot in the Big Dance in a fortnight’s time.

The Cougars headed into the weekend on the back of a near-perfect season, concluding the regular rounds 2 games clear of the Hawks.

However, the Hawks are responsible for spoiling what would have been an undefeated season for the Cougars by producing a gruelling 3-point victory over the side in their most recent encounter in round 14.

The Hawks showed the minor premiers from the get-go that they were a force to be reckoned with, booting 3 goals and earning themselves a 17-point lead heading into the first break.

The Cougars booted two majors in the second term to the Hawks’ one, slightly narrowing the margin but still leaving the underdog Hawks in front by 11 points at the main break.

The Cougars finally snapped into gear in the third term, slotting 5 goals 3 behinds and heading into the final break in front for the first time all game by 14 points.

USQ capped off the game with a stellar fourth-quarter effort, adding on another 37 points while rendering the Hawks goalless for the final term.

The final siren sounded to acknowledge the Cougars as 48-point victors, earning them a well-deserved place in the Grand Final while forcing the Hawks to head to a knock-out preliminary final next Saturday against the Warwick Redbacks.