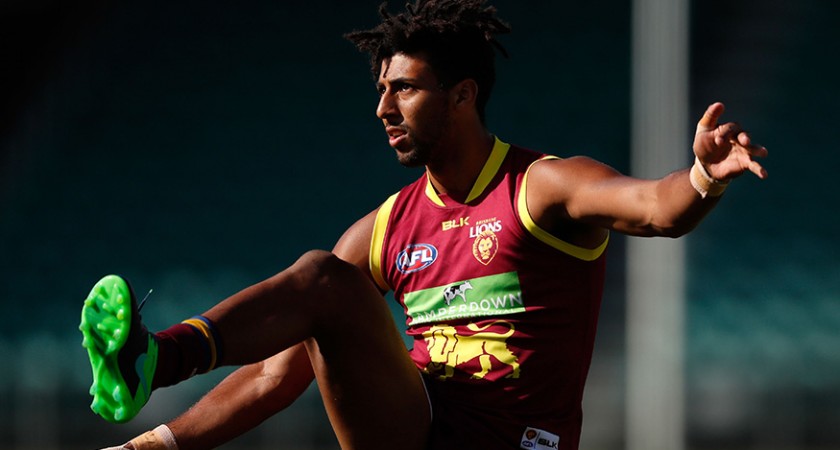 Sam Reid is edging closer and closer to a debut AFL finals appearance as he simply refuses to concede his place in the star-studded GWS Giants outfit.

And after a stellar performance against the Brisbane Lions at the Gabba on Saturday in Round 14 of the Toyota AFL premiership the unfashionable Sunshine Coaster has another significant factor on his side in the inevitable selection battle ahead as a raft of Giants players return from injury.

Reid was used as a tagger by Giants coach Leon Cameron and shut down Lions ace Dayne Zorko in a manner not done since Zorko established himself as one of the AFL’s premier midfielders.

Averaging 26.9 possessions through the first 12 games of the season and in contention for the All-Australian squad, Zorko had just five possessions in the Lions’ 10-goal loss.

Coming off best afield performances in his two previous games in which he received maximum votes in the AFL Coach’s Association Player of the Year Award, Zorko didn’t touch the ball in the second half.

In a talent-laden Giants side devoid of a specialist tagger, Reid’ shut-down performance on the prolific Lions ace it is another big credit in the selection run to the finals.

With Zorko well held and Lions captain Dayne Beams out of the game inside five minutes with a serious shoulder injury that could end his season, the Lions were powerless to keep up with the visitors’ prolific midfield.

And it wasn’t all defence for Reid. He had 17 possessions (seven contested), four clearances, two goals and a goal assist for a season-high 83 Champion Data ranking points.

Reid, who debuted in 2008, has already played more games this season (11) than in any previous season, and has only missed through injury since being an emergency in Round 1.

He’s averaged 12 possessions per game in a real ‘Mr Fix-It’ role, has kicked as many goals as Steve Johnson, and has played in more winning teams this season than any other Queenslander.

With the Giants bound for the finals in September it is going to be a big call for coach Cameron to leave the elevated rookie out of his top side.

While Reid took the honors over Zorko at the Gabba in what will be a valuable learning experience for the dual Lions B&F winner, Zorko wasn’t a total non-contributor. He still managed a game-high nine tackles.

Archie Smith was a multiple goal-kicker for the first time in his young career and doubled his career goal tally, kicking two goals for the Lions to go with nine disposals and seven hit-outs in another spirited contribution.

Eric Hipwood had nine disposals and a goal.

Gold Coast’s Jarrod Harbrow posted the highest Champion Data ranking score among the Queenslanders over the weekend, earning a season-high 119 points for a season-high 29 possessions and 11 marks against St.Kilda at Etihad.

Returning from a two-match club suspension, Harbrow also had 11 marks, one less than his career best, and posted his sixth CD ‘ton’ of the season.

In the same game, Jesse Joyce had 18 possessions for the Suns, Alex Sexton 14 and Rory Thompson 10 possessions in his first AFL game since Round 3.

For the Saints, Nick Riewoldt had 13 possessions, eight marks and three goals, and Sam Gilbert 12 possessions.

Fremantle’s Lachie Weller collected the other CD century of the weekend when he earned 114 ranking points against Carlton at the MCG for 23 disposals and six tackles. Lee Spurr had 22 possessions.

Charlie Dixon became just the ninth Queenslander to kick 150 AFL goals when he continued his outstanding season for Port Adelaide against Collingwood.

Playing further up the ground for the second week in a row, Dixon has 12 disposals, six marks, seven inside 50’s, one goal and one goal assist.

It was a mixed weekend for Queenslanders in the Lions Reserves, with a string of good performances soured by a season-ending broken leg for Tom Bell. He will undergo surgery Wednesday.

Liam Dawson had 15 possessions and kicked five goals to rank among the Lions’ best in a 96-point win over the Giants Reserves, while Ben Keays had 31 possessions to be best afield.

Jono Freeman (five goals) and Matthew Hammelmann (four goals) also hit the scoreboard hard while Claye Beams (25 possessions, 1 goal) was another key contributor as he pushes for a return to the senior side.

In the VFL, Braydon Preuss was named second best for Werribee against Footscray with 17 possessions and 63 hit-outs, and Corey Wagner made a successful return from injury with nine disposals.

Josh Thomas (25 possessions) and Lachie Keeffe (12 possessions 2 goals) were among Collingwood’s best against Port Melbourne, while Josh Smith had 20 possessions. Jesse White (9 possessions) made a successful return from injury.

Brendan Whitecross was named fourth best for Box Hill against Casey with 28 disposals. Jake Spencer had seven possessions and 25 hit-outs for Casey.

Tom Hickey had 13 possessions and 36 hit-outs for Sandringham against Coburg, and Wylie Buzza 17 possessions, six marks and a goal for Geelong against North Ballarat.