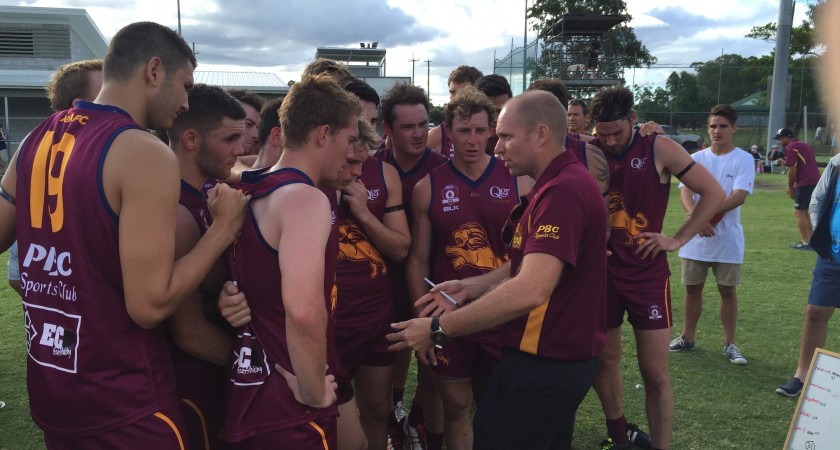 Match of the round

When the ball was bounced for the first time in 2015, Palm Beach were on.

Within seconds, first gamer Zac Harrison, a product of the Palm Beach juniors, had his first kick in footy.

What he did next put him in a special club.

With defenders hanging off both hips, he found space, picked up the ball, and kicked it straight over the goal umpires head like a 100 game player. It was ice cold.

It set the tone for the rest of the day for the Lions, as their run and carry did the damage early against a fresh-faced Broadbeach outfit.

The effort was there all day for the Cats, they just lacked a little bit of polish, and couldn’t capitalise any momentum on the scoreboard.

The Lions forward line may not be as tall as previous years but it still looked very potent.

Jackson Emblem and Jesse Derrick showed some real football smarts during the day, finishing with three goals each.

Brade Palmer battled hard all day for Broadbeach in the ruck, and Jarren Pantic gave them a real option across half forward when he was down there, but the Lions run was unable to be stopped.

They were never headed from the first goal, running out 38-point winners, sending a real statement to the rest of the competition that they will once again be there abouts in 2015.

“We were just really happy with our effort. We were going to base our game on effort because we believe effort gets reward, we were super super happy.

“We had three kids who had never played senior footy before, and we were stoked with them.

“Zac Harrison has got courage written all over him, he flew back into packs late when the game was on the line.

“Our game comes from run. We are not a tall team, we have to get our running game right. Our primary objective is to defend, and then run and attack when you can.”

“It was very frustrating, we were manhandled, bullied and outplayed.

“We fell away from our structures and didn’t play team footy, so all in all it was very disappointing.

“There wasn’t much in it at quarter time, we had been dictated to a little bit and we didn’t really respond to that, but we couldn’t get enough quality ball to our forwards so we couldn’t put on scoreboard pressure.”

Contest; something that hasn’t been written all too often in the last 12 months when Morningside have taken the field, but that’s what they got yesterday.

The Magpies took it right up to the Panthers all day, going into the main break five points up.

Matt Davis kicked the Magpies first two, and showed they were there to play.

Contested ball was a real focus of the Magpies, and they executed well, up in most stats throughout the day.

They call the third quarter the premiership quarter for a reason; it’s when champion teams step up.

Morningside kicked four goals to one, to turn a five-point deficit into a 14-point advantage at the final change.

To the Magpies credit, they threw everything that had at them until the final siren, falling agonizingly short of being the first team to beat the Panthers since 2013.

What we take from the game is that Morningside aren’t unbeatable, but still banked the four points, and the Magpies are up for the fight in 2015.

“They beat us up and we won, I never said by how much.

“On that little ground they were very accountable, they were good around the footy and I thought we were a little bit flat in the first half.

“We haven’t had a win like that since 2013. It was exciting and we really enjoyed it.”

“Take nothing away from them, but we won and got the four points.

“We had eight new players today from grand final day and went through a new experience.”

“Close but no cigar, we beat them everywhere but on the scoreboard.

“We had more inside 50’s, more tackles and more clearances, but didn’t finish off as well as what they did.

“They are certainly not unbeatable, we showed that today, but there was a lot of positive signs on the way we moved the ball and put pressure on the opposition.

“We still have 15 out, we will get a couple of senior players back, and we will take into next week that what we have been doing for the last four and a half months works.”

Sandgate had a point to prove in 2015, and although they didn’t get the four points this week, they are on the way to achieving it.

They are out to get respect back in the footy world, and they took it to Labrador in yesterday’s game.

In the end it was experience and polish that prevailed, but the Tigers were made to earn yesterdays win.

Sandgate jumped out of the blocks the better, kicking five goals to go into quarter time 15 up.

Labrador came out firing in the second, with 11 scoring shots to nil, but only managed the three majors.

Sandgate could have dropped their heads at half time; instead they came out with real intent in the second half through the likes of Ben Beaven and Jordan Maynard.

They got back within six-points at three quarter time, but from there, the Tigers steadied the ship to run out 30-point winners.

“Today was your typical round one encounter, its what you get, all teams are on equal points and it’s hell for leather.

“We played against a Sandgate side that were ferocious at the football, their contested footy was really good, they were relentless.

“We certainly got on top in the second quarter but we kicked three goals eight, so we were disappointed with that.

“We got the four points, we got no injuries and we look forward to round 2.

“It was very ugly, and we did win very ugly, now we look forward to next week. “

“We chasing respect in the football world and I think we took a little step towards that today.

“We just want to prove that we are not easy beats, and teams will have to play well to beat us, and I think we proved that today.

“We were in that game up to our ears all day today, they were probably just a little bit more polished than we were.

“The positive for me is that I know we can compete now. We had a few out today, but there are a lot of good signs there, I’m genuinely excited now.”

It was an absolute shootout at PBI oval yesterday between two teams looking to take the next step in their development.

Peter Young’s men found their rhythm in the second, getting the ball out wide to their runners, they lead at half time by two goals.

The Gorilla’s ramped up the contested work in the third, locking the ball down in the middle and choking the run of the Demons.

Their accuracy in front of goal again proved vital, as their seven goal to two quarter saw them head into the final change 15-points up.

The game was primed for a grandstand finish.

When Jacob Watson put Wilston Grange up by 21 early in the last, they looked home, but the Demons had other ideas.

Four goals in quick succession saw the Demons hit the front, and were storming home with all the momentum.

Matt Trewhella’s men stopped the bleeding, slowed the ball down, and kicked the last two of the game through Frazer Eaton to sneak home by 11 in a thriller.

These two teams are going to trouble a lot of others this year.

“We kicked straight that’s for sure.

“All the stats say it was very even all day, but I think where we started to get on top was our movement from defense to the forward line.

“They spread so well, and that sort of win gives the guys who have been here for the last four years a bit of confidence.”

“It was us getting on top of their outside game that allowed us to get back in the game, but it was just a terrific game of footy.”

“They started better than us, but I thought we really took control in the second quarter, from there the game swung up and down.

“I thought late in the game we had opportunities to kick those goals, there was a couple of decisions that were made that probably didn’t work out, so there’s still room to improve and if we fix those things we are right in it.

“Our tackling was really good in patches, but you’ve got to be consistent across four quarters.

“To have 28 shots at goal and not win is disappointing.”

Whoever got their running game going the best was always going to win this game.

These two young sides will be renowned this year for their free flowing, play on brand of football, and today it was the Vultures who turned it on.

Mt Gravatt peppered the goals early, but were unable to hurt the Red Lions where it counted.

Despite the Vultures having 5 extra scoring shots, the two teams couldn’t be separated at the first break.

Mt Gravatt started to capatalise on their momentum in the second, With Rhys Estall proving to be a headache for the Red Lions defense.

They went in to the main break one goal up, but it was still anyone’s game.

The Vultures turned the game on its head in the third, putting nine majors on the board to be in total control of the contest at the final break.

They cue was certainly not put in the rack in the last, as they continued to run and play with a bit of dash through the middle, in a four goal to one quarter that saw them run out 77 point winners.

They may be young, but they certainly showed what they were capable of in the second half today.

“We are just happy to get away with a win today.

“It was really hard going in the first half, we had a game on our hands, all credit to them, they have improved from last year.

“Our boys weathered the storm, and do the things we have trained for, it really opened up in the second half which worked well.

“We started to break the lines and we really shut UQ down which was fantastic, so it was good to get the run going.

“It’s never going to be real pretty first few games of the year but I am really happy to come away with the win.

“The game intensity was really high, and I thought in the first half we maintained it and were playing really well.

“As we started to get a bit more tired we started to slip into some bad habits, I thought their midfield stepped it up and little bit and we weren’t able to go with them or hold it in our forward 50, which cost us in the second half.

“We proved that if we play the way we did in the first half we can stick with them, we had eight new players today, so that’s a positive.”