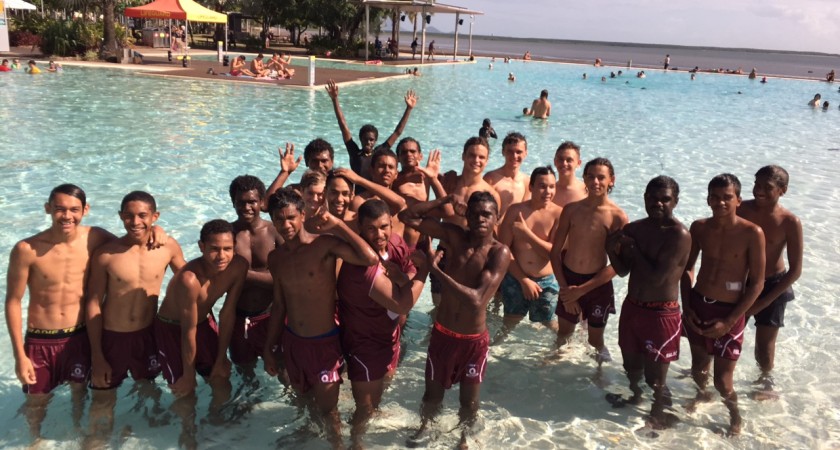 The second day of the championships got under way with a Talent Pathways special education session at Cazalys club, adjacent to the football stadium. With a cooler breeze but beautiful tropical skies, another day’s entertainment began.

Queensland had first use of the breeze, but it was their opponents from Victoria/Tasmania that made the early running. Kicking into a stiff morning breeze they kicked early goals to race out to a handy lead of two goals by half time. Queensland fought back hard after the break, but could not bridge the gap. A couple of late goals to the Victoria/Tasmania team put the result beyond doubt, running out 31 point winner.

Western Australia applied the blowtorch early to the game but out-gunned New South Wales/ACT side. Early goals set up a healthy lead that Western Australia would not surrender. At times the football was electrifying, even at times defying physics, as the Western Australian defence stood firm and set up more and more scoring shots for a 40 point win.

The Queensland team, using the wind first, were away to a quick lead and got a couple of goals clear before the Victoria/Tasmania team began working their way back before half time. The second half remained close and tight with Queensland holding on to their lead. But Victoria/Tasmania found space and created goals with the wind to pullaway to a hard earned 22 point win.

The South Australian team were very well drilled and fired early in their clash with a brave but at times overwhelmed New South Wales/ACT team. Early goals set the trend as the Croweaters attacked continually, placing their opposition defenders under constant pressure. The second half saw New South Wales/ACT continue to fight but went down in the end by 41 points.

The Sandgropers put on a clinical display in the first half against the Queenlanders, showing how to play a powerhouse brand of football and score heavily into the wind. Injuries conspired to bring down the Queensland runners also which didn’t help. The second half became a procession as a undermanned Queensland team struggled to contain a rampant Western Australia, eventually going down by 76 points.

In a hard fought and at times scrappy match, both teams threw themselves willingly into the contest. New South Wales/ACT were able to get ahead using the breeze, but never with a comfortable enough lead to feel safe. The second half saw South Australia keep coming back into the game and eventually were able to grab the lead, running on to a 14 point victory.

In another hard fought match it was the Victoria/Tasmania team that got away to an early break, which was enough for them to hold throughout the match. The Territorians never stopped fighting, and at times managed passages of play that threatened to change the game momentum, but Victoria/Tasmania held firm and kicked clutch goals to take the game by 16 points.

The Queenslanders, keen to avenge their last match defeat, came out breathing fire and had soon racked up an almost unassailable lead with four first half goals. Their test was to hold a talented and determined Western Australia team that would have the wind in the second half. Whilst the Sandgropers came back hard, the Queenslanders held their nerve an ran out 29 point victors.

An engrossing first half saw the teams separated by just a point at the break. Victoria/Tasmania held the slenderest of leads, but knew the Territory boys would come hard. In an amazing second half, possibly the best of the championships, Northern Territory threw everything at the Victoria/Tasmania team, but the defences were tremendous with a goalless stanza and the first draw of the tournament.

With the wind having dropped away under the lights at Cazalys, teams were now on an even par and it was the New South wales/ACT that made the best of the conditions, getting away early and setting up a healthy half time lead. The Western Australians never gave up trying but could not the gap narrowed. Both teams showed great pace and exuberance, but it was the superior ball skills that saw New South Wales run out comfortable winners by

In an enthralling game, both sides ran the ball back and forward with, at times, reckless abandon. Every time South Australia looked like getting away, the Northern Territory boys came right back at them in a see sawing game. The Territorians snuck a lead late in the second half, but just as they looked like holding on, South Australia snagged a loose ball and goaled with 10 seconds left for an amazing five point win.