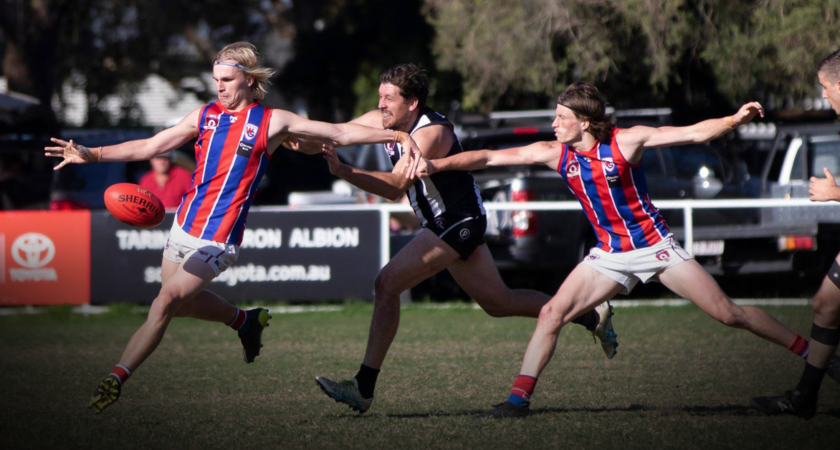 Pre-match, Western Magpies coach Brydan Morgan was worried that his side was ripe for an upset when they played Wilston Grange in a history-making clash on Good Friday.

Fielding a side that contained seven changes from the previous weekend, the indicators were there that the Magpies were set up for a Gorillas ambush in the clash at Hickey Park.

The Gorillas were also coming off a second round bye wo were fresh and ready to go.

Morgan’s concerns were certainly justified because the Grange completely outplayed the Magpies for a meritorious victory, by 9.13 (67) to 2.10 (22).

On Friday the Gorillas controlled play completely from the opening bounce, eventually keeping the visitors to only two goals in a match played in slippery conditions as showers fell throughout the afternoon before a heavy deluge in the last quarter when not a goal was scored by either side.

It took the Magpies 28 minutes to kick their first goal and the second did not come until the 14th minute mark of the third term.

Five behinds to the visitors were the only times the goal umpires were made to work.

It was an at-times fiery clash with a number of flare-ups that the downpour could not douse.

But all credit went to the Gorillas, whose defence was outstanding and their midfield effort presented a barrier that the visitors found it difficult to penetrate.

He later admitted it was pleasing to get rid of the pressure of trying for his maiden success.

“It was an arm wrestle,” he said. “The contest was the biggest thing – we just wanted to win the arm wrestle today.

“And another big thing was keeping the Magpies to two goals, just the way our defensive pressure was there, plus the ability to control the game in the midfield was probably the difference in the end.”

At the back Aspley’s rangy Sudanese youngster Jimmy Aganas and Tom Smartt, in particular, were outstanding.

Aganas had not had a training run with the Gorillas but fitted like a well-worn glove.

The Grange had other stand-outs around the ground, led by hard-working Isaac Corvo, Frazer Eaton and Harry Milford, who was the only multiple goalkicker with three majors to his name.

Over in the Magpies camp their best were Logan Murray, Macauley Lonergan, Jack Goodall and Luca Winton.

Coach Morgan was gracious in defeat and was not looking for excuses.
“Full credit to Grange,” he said.

“In the first half especially, they were cleaner and harder and showed more desire to win the ball.

“In contract we fumbled, missed tackles and couldn’t get any clean possession.

“We knew they would be ready and we failed to compete at the level required.”

The Magpies now have eight days to regroup before their fourth-round clash against 2018 runners-up Broadbeach at McCarthy Homes Oval.

The Gorillas, though, have a break of only five days to prepare for their northern Brisbane derby against Sandgate on Anzac Day eve, April 24, at Hickey Park.